Residents clean the streets after floods hit the area with pouring rains in Raposos, in Minas Gerais state, Brazil, on Jan 13, 2022.

LONDON - With climate change fueling dangerous weather worldwide, the United Nations is pledging that early-warning weather monitoring will cover everyone on the planet in five years.

"Half of humanity is already in the danger zone," UN Secretary-General António Guterres said earlier this week. And yet, "one-third of the world's people, mainly in least developed countries and small island developing states, are still not covered by early warning systems."

Today, there are about five times the number of weather-related disasters than there were in the 1970s. These droughts, floods, heatwaves and storms have killed more than two million people and wrought $3.64 trillion (S$4.9 trillion) in losses worldwide since 1970, WMO data show.

With the trend expected to worsen as global temperatures continue to climb, "there is a need to invest $1.5 billion" in the next five years to predict when extreme events might occur, said World Meteorological Organisation Secretary-General Petteri Taalas.

It was not immediately clear how much money the UN has allocated for the project, part of which was announced at last year’s UN climate summit in Glasgow, Scotland. 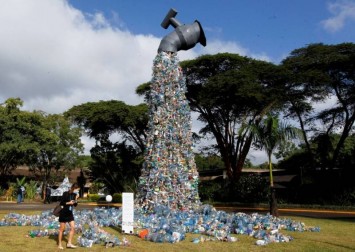 Africa is particularly vulnerable to natural disasters, which also can impact food security.

Parts of the continent are ravaged frequently by drought, cyclones or intense rainfall, but 60 per cent of the population lives in areas that are not covered by early-warning weather systems.

While natural disasters have become more frequent, warning systems have helped cut death tolls by some 76 per cent since the 1970s by giving people time to prepare for or flee oncoming danger, or by prompting governments to marshal aid.

Such systems can also help protect economies. A 24-hour storm warning, for example, can help people reduce damage by roughly 30 per cent, according to a 2019 report by the Global Commission on Adaptation.

The same report suggested that spending $800 million on early-warning systems in developing countries alone would avoid up to $16 billion in annual losses.

Still, "we must not stop at just preventing deaths," said Mohamed Adow, director of Power Shift Africa, a Nairobi-based think tank. "If people survive a climate disaster but then are left to fend for themselves with their homes and livelihoods destroyed, it's a meagre blessing."