US calls on Southeast Asian nations to take action on Myanmar

Blinken urged Asean to take “immediate action” on a five-point consensus to appoint a special envoy to Myanmar.

The United States has “deep concerns” about the military coup in Myanmar and calls on Southeast Asian nations to take action to end violence and restore democracy in the country, Secretary of State Antony Blinken said on Wednesday (July 14).

The Association of Southeast Nations (Asean) has been leading the main diplomatic effort on member country Myanmar since a Feb. 1 coup plunged it into turmoil.

During a Wednesday video conference with Asean foreign ministers, Blinken urged the bloc to take “immediate action” on a five-point consensus, agreed upon in April, to appoint a special envoy to Myanmar, State Department spokesperson Ned Price said in a statement.

Myanmar has descended into chaos after the coup, with hundreds of protesters killed by security forces and thousands jailed amid paralysing strikes and growing conflict in border regions.

Blinken asked for the release of all those “unjustly detained” in the country, and the restoration of Myanmar’s democratic transition, Price said.

The secretary of state also emphasised the US rejection of China’s “unlawful maritime claims” in the South China Sea and said Washington “stands with Southeast Asian claimants in the face of (Chinese) coercion”, Price said.

Chinese Ministry of Foreign Affairs spokesperson Zhao Lijian responded by saying the US had broken with its neutral position and was driving a wedge between China and Asean, adding that Washington had no right to lecture Beijing over the South China Sea as it had not signed the United Nations Convention on the Law of the Sea.

The meeting with the 10-member bloc is the first since the Biden administration took office in January, and comes amid concerns among diplomats and others that Washington has not been paying sufficient attention to a region that is crucial to its regional strategy to counter an increasingly powerful China.

Beijing claims vast swathes of the disputed South China Sea via its unilaterally declared “nine-dash line” which intersects with the exclusive economic zones of Vietnam, Malaysia, Brunei, Indonesia and the Philippines – all Asean members.

Trillions of dollars in annual trade flows through the disputed waterway. 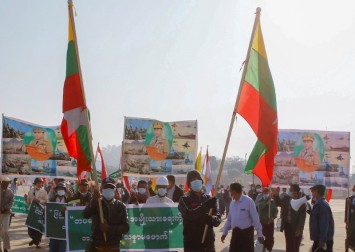 In addition to the South China Sea, the Mekong River has become a new front in the US-China rivalry, with Beijing overtaking Washington in both spending and influence over downstream countries that are at the mercy of its control of the river’s waters.

Price said Blinken “pledged continued US support for a free and open Mekong region under the Mekong-US Partnership”.

“We understand that multilateralism was not a key focus for the previous administration, but the Biden administration’s embrace of multilateral cooperation is a welcome development,” Hishammuddin said, according to a copy of his delivered remarks.

“This path is the only way forward to ensure stability, peace, prosperity and security for our region.”