KUALA LUMPUR - Malaysian financier Low Taek Jho, accused of links to a plot to siphon billions of dollars from a Malaysian state fund, is trying to stop the United States government from seizing a $250 million (S$327 million) yacht in Indonesia, court filings showed.

The Cayman Islands-flagged Equanimity, a 300-foot superyacht allegedly bought by money stolen from 1Malaysia Development Berhad (1MDB), was impounded on behalf of US authorities off the coast of Bali last month, amid a multi-billion dollar corruption investigation launched by the US Department of Justice (DoJ).

The DOJ is seeking to move the yacht to the United States where it can be taken into US government custody and sold, according to a filing at a California court.

The department said Low bought the yacht with funds "stolen and embezzled from 1MDB" and said he is fighting the US seizure through four companies, named as claimants in the case.

The claimants kept the yacht "in a series of foreign locations and frustrated the government's efforts to bring this asset to the United States", the DOJ filing said.

"There was significant evidence that Low instructed claimants to keep the Equanimity outside the government's hands and outside the United States," it said.

It said Low, also known as Jho Low, had instructed crew members to turn off the yacht's Automatic Identification System and avoid sailing into certain jurisdictions such as Singapore and Australia in order to evade detection.

Lawyers for the claimants had also filed a lawsuit in Indonesia intended to stop the seizure, the department said. 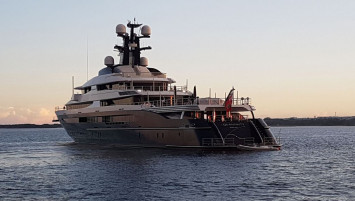 A total of $4.5 billion was misappropriated from 1MDB by high-level officials of the fund and their associates, according to civil lawsuits filed by the department under a kleptocracy asset recovery initiative.

Malaysian Prime Minister Najib Razak set up 1MDB in 2009 and previously served as chairman of its advisory board. He and the fund have denied any wrongdoing.

Low's whereabouts are unknown and a spokesman at a US-based public relations firm that has represented him did not respond to requests for comment.

Low had previously denied wrongdoing, saying it was "disappointing that, rather than reflecting on the deeply flawed and politically motivated allegations, the DOJ is continuing with its pattern of global overreach".

In a separate filing on Monday, the claimants' lawyers also applied for an emergency order to keep the Equanimity in Indonesia for 30 days, saying that moving it to the United States would endanger the lives of the crew and lower the value of the yacht.

The claimants also said the government intended to sell the vessel in a way that would "wholly fail to maximise its value".

The DOJ filed a response on Tuesday saying keeping the yacht in Indonesia could risk interfering with sovereign rights.

Other Low assets sought by the department include a private jet, a hotel and real estate in New York, and a $107 million interest in EMI Music Publishing.