A potential date descended into a bloody murder after 25-year-old Kevin Bacon met his gruesome end.

As reported by Buzzfeed News, the Michigan hairstylist was stabbed in the back, hung upside down from a ceiling, and had his testicles cut off by Mark Latunski, 50.

Michigan authorities revealed to the digital media outlet that the suspect, Latunski, admitted that he cooked and ate Bacon's testicles after getting acquainted with him through the gay dating app, Grindr.

Buzzfeed News reported that according to court documents released on Monday (Jan 6), Bacon was last seen on Christmas Eve, where he told his roommate that he was leaving to meet up with someone from the app.

In the court documents, Detective Sergeant James Moore testified: "Mr Latunski stated he used a knife, stabbed him in the back one time, then slit his throat. Afterwards, Mr Latunski stated he wrapped rope around the ankles of Mr Bacon, and hung him from the rafters on the ceiling."

Authorities also believe that Bacon was already dead when Latunski castrated him.

When Bacon went missing, his parents and friends organised search parties for him and even put up a missing persons notice on social media.

After the grisly details of Bacon's death were released, his parents appeared in a press conference and admitted that they were still trying to "process everything".

His father, Karl Bacon, said: "He (Kevin) obviously got into something he was not prepared for. Evil does exist, and it touched us.

"It's gut-wrenching to hear the details, and we're beside ourselves. I don't think we've had the time... to process everything." 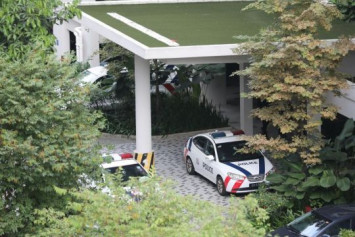 According to The Flint Journal, Latunski's divorce, custody, and criminal records show a long history of mental illness and he was also believed to have stopped taking his prescription medication.

His ex-wife, Emily Latunski, even filed a court motion in Aug 2019 to suspend Latunski's parenting time. The motion claimed that he has "a history of mental illness" and "a history of going off his medication".

Latunski's husband of three years, Jamie Arnold, told the publication that he wasn't aware of his partner's condition until he was arrested for failing to pay child support in July 2019.

He added: "To my knowledge, I couldn't force him to see a therapist or take medication. Never in a million years did I think he'd be capable of doing such a horrendous crime.

"In hindsight, it’s easy to sit back and speculate but at the time you’re going through it there are emotions and feelings involved. You don’t want to think that the person you fell in love with is some crazy homicidal maniac.

"I pray that God is there for Kevin Bacon’s family in their time of need and that He helps us all get through this, one day at a time."

#Murder/Manslaughter #online dating #In Case You Missed It