Vaping-linked lung injury may be caused by toxic fumes: US study

Health authorities have been investigating the cause of a US outbreak of severe pulmonary disease linked to vaping, which has mainly affected young males, since July.

WASHINGTON - Lung biopsies from 17 people affected by a US outbreak of severe pulmonary disease linked to vaping have revealed the injuries are consistent with exposure to noxious chemical fumes, scientists reported on Wednesday (Oct 2).

The research, carried out by the Mayo Clinic, a medical nonprofit, and published in The New England Journal of Medicine, found no evidence of tissue injury caused by the accumulation of fatty substances, a prevailing theory until now.

"While we can't discount the potential role of lipids, we have not seen anything to suggest this is a problem caused by lipid accumulation in the lungs," said Dr Brandon Larsen, a surgical pathologist at Mayo Clinic Arizona.

"Instead, it seems to be some kind of direct chemical injury, similar to what one might see with exposures to toxic chemical fumes, poisonous gases and toxic agents." 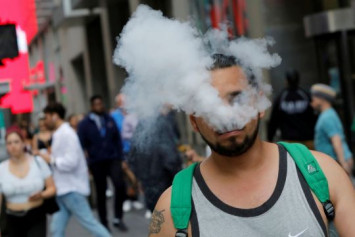 But they represent only a small fraction of the more than 800 lung injury cases reported by the Centres for Disease Control and Prevention (CDC) as being associated with electronic cigarette use, or vaping, over the past few months.

There have been 12 deaths, according to the latest figures from the CDC published last week.

Health authorities have been investigating the cause of the outbreak, which has mainly affected young males, since July.

THC is cut using other additives like solvents and flavours so it can be heated and inhaled with a vaping device. Investigators are hoping to resolve which of these substances could be causing the lung ailments.