What did you say? 'Nah he tweakin' is blowing up on social media, here's why

Unless you've been living under a rock lately, you've probably come across the phrase 'nah he tweakin' while scrolling through your social media feed.

But why is it trending and what does it actually mean? The phrase somehow involves rapper Lil Nas X, skateboarder Tony Hawk, Satan, and a bit of bad blood.

In March, Nike sued a New York-based company for producing "Satan Shoes" which had a drop of human blood in each sole, and Lil Nas X was heavily criticised for being part of this collaboration.

666 pairs will be released individually numbered and include a drop of human blood in the air bubble for $1018. 🩸 Nike is NOT involved with this project.

NEED your thoughts on these! 😳 pic.twitter.com/Mt4HV4Q71k

On Aug 24, Hawk, 53, announced that he was releasing limited edition skateboards "infused with 100% real Tony Hawk" (i.e. his blood).

The public's response has been pretty positive and the 22-year-old rapper was having none of it.

now that tony hawk has released skateboards with his blood painted on them, and there was no public outrage, are y’all ready to admit y’all were never actually upset over the blood in the shoes? and maybe u were mad for some other reason? 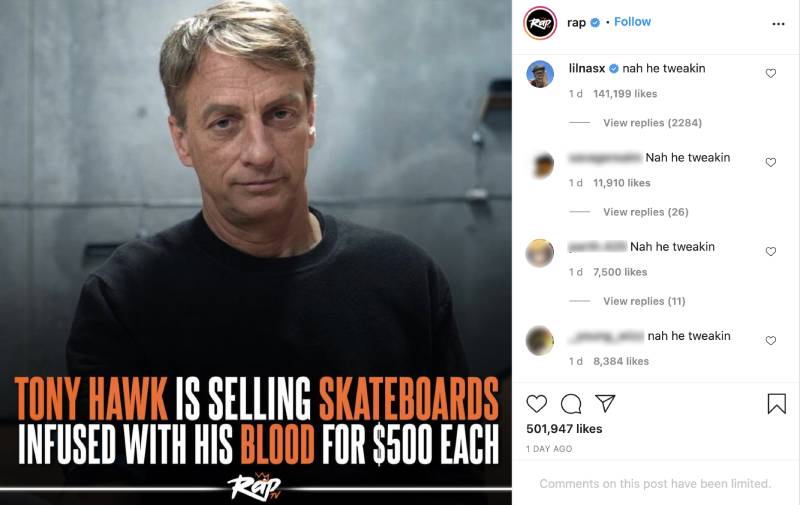 Lil Nas X expressed his disdain at how unfair it was that Hawk did not receive the same amount of backlash as he did for a similar collaboration.

All that frustration and annoyance came out as "nah he tweakin" and internet users were champing at the bit to get the phrase trending.

According to Urban Dictionary, "tweakin" can be understood as acting in stupid or annoying behaviour.

Yeah we tweakin, but only a little bit. We’re aware that some people are having issues loading their comments (we're fixing that) and that some are seeing a bunch of comments saying "nah he tweakin" (what is that?). More soon! pic.twitter.com/eek6t2qE40

The virality of "nah he tweakin" comments on Instagram reached its peak when it was what most people could see on the platform.

This phrase drowned out other comments and Instagram ended up putting out a quirky statement about their team working to fix this issue.

Hopefully, you now have a better idea of what the term means. Even Hawk seems to get it.

But let's stop encouraging celebrities to put blood in their newly released products, shall we?