WHO vows nothing 'ridiculous' as public submits ideas to rename monkeypox

Test tubes labelled "Monkeypox virus positive" are seen in this illustration taken, on May 22, 2022.

GENEVA/LONDON - Poxy McPoxface, TRUMP-22 and Mpox are some of the ideas sent in by the public to the World Health Organisation as it seeks a new name for monkeypox.

Often disease names are chosen behind closed doors by a technical committee, but the WHO has this time decided to open up the process to the public.

After a slow start, dozens of submissions have now been made from a range of contributors including academics, doctors, and a gay community activist.

They range from the technical (OPOXID-22, submitted by Harvard Medical School emergency physician Jeremy Faust) to the farcical (Poxy McPoxface, submitted by Andrew Yi, in an allusion to Boaty McBoatface - almost the name of a British polar research vessel after a public vote on the choice).

Pressure is growing for a new name for the disease, in part because critics say it is misleading, since monkeys are not the original animal host.

A group of leading scientists wrote a position paper in June calling for a name that was "neutral, non-discriminatory and non-stigmatising" amid fears the name can be used in a racist way.

Until this year, monkeypox has mainly spread only in a group of countries in west and central Africa.

"It's very important we find a new name for monkeypox because this is best practice not to create any offence to an ethical group, a region, a country, an animal etc," WHO spokeswoman Fadela Chaib said on Tuesday (Aug 16).

"The WHO is very concerned by this issue and we want to find a name that is not stigmatising," she added without giving a timeline.

Read Also
What is monkeypox and how is it different from Covid? 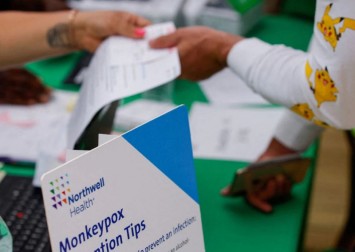 One of the more popular submissions so far is Mpox, submitted by Samuel Miriello, director of a men's health organisation REZO which is already using the name in its outreach campaigns in Montreal, Canada.

"When you remove the monkey imagery, people seem to understand more quickly that there's an emergency that needs to be taken seriously," he told Reuters.

Another proposal, TRUMP-22, appeared to be refer to former US president Donald Trump who used the controversial term "Chinese virus" for the new coronavirus, although its author said it stood for "Toxic Rash of Unrecognised Mysterious Provenance of 2022".

Submissions mocking the gay community had earlier been posted but were later removed from the WHO site.

The WHO has the mandate to assign new names to existing diseases under the International Classification of Diseases. It has already renamed monkeypox virus variants, or clades, changing them from African regions to Roman numerals.

The WHO said it would decide among the proposals "according to their scientific validity, their acceptability, their pronounceability (and) whether they can be used in different languages".

"I am sure we will not come up with a ridiculous name," said Chaib.

Monkeypox was first discovered in 1958 and named after the first animal to show symptoms. The WHO declared the current outbreak a public health emergency last month having reported more than 32,000 cases from over 80 countries.