CHICAGO - A judge in the US state of Minnesota sentenced a YouTube prankster to six months in prison on Wednesday (Mar 14) for fatally shooting her boyfriend in a botched video stunt they hoped would go viral.

Monalisa Perez, a 20-year-old mother of two children, believed her boyfriend Pedro Ruiz would be shielded by a thick book as she shot him at close range last June in front of onlookers.

Perez accepted an agreement with prosecutors in December and pleaded guilty to second-degree manslaughter.

Judge Jeffrey Remick followed the plea agreement recommendations in his sentencing, and allowed Perez to serve her prison time in 10-day increments over three years.

She is eligible to serve the final three months of her sentence in home confinement and is subject to 10 years of supervised probation.

Perez and Ruiz were recording the stunt for their YouTube channel which published videos of their daily lives and pranks. 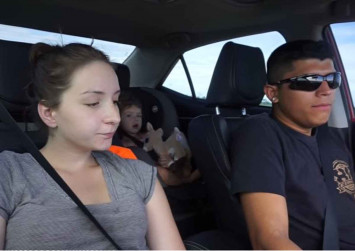 Ruiz convinced Perez to shoot him from a foot away with a powerful Desert Eagle .50-calibre pistol while he held a 1.5-inch (3.8 centimetres) thick book in front of his chest.

The young man, who had hoped for internet fame, presented Perez with another book with a bullet hole on one side and no exit hole, as proof his plan would work, police said.

"Me and Pedro are probably going to shoot one of the most dangerous videos ever," Perez wrote on Twitter prior to performing the stunt. "HIS idea not MINE."

With their video cameras recording and alarmed onlookers watching, Perez, who was pregnant with the couple's second child, pulled the trigger.

The bullet pierced the book and fatally wounded Ruiz. He died of a single gunshot wound to the chest.

Family and friends said at the time that Ruiz had been talking about performing the stunt for some time.

She said the man's response was, "We want more viewers."

The couple's YouTube channel is still active and its videos have accumulated 5.3 million views.

As part of her plea deal, Perez agreed to not seek financial gain from her case and was banned from owning firearms.