An audio snippet with just two syllables has ignited an internet meltdown, dividing social media users into staunchly opposed camps: do you hear "Yanny" or "Laurel?"

Roland Szabo, 18, said he recorded the seemingly innocuous audio from a vocabulary website while doing a project for his school in the US state of Georgia.

He played it for his peers, who disagreed over whether the syllables formed "Yanny" or "Laurel."

Intrigued, Szabo sent it to a friend who posted the clip on Instagram and created a poll that quickly went viral, triggering a mass debate that has spread internationally.

Input from celebrities has inflamed the frenzy: "It's Yanny," horror writer Stephen King said in a deadpan tweet.

"It's so clearly laurel," quipped supermodel Chrissy Teigen. "I can't figure out how one would hear yanny."

In perhaps the most vexing element of the debate, the majority of listeners hear beyond doubt one of the two words, with few waffling between the two.

Others hear only laughter.

The US Department of Defence made light of the controversy on its Twitter account, with a photo of a US Marine Corps instructor berating a recruit: "I said it's #Yanny, recruit, not #Laurel!"

Circulating elsewhere on the internet was the line: "Man Calls Girlfriend 'Yanny' During Sex, Swears He Said 'Laurel'."

A straw poll carried out among staff in AFP's Washington bureau counted 17 for Yanny, and 14 for Laurel. Just three were caught in between -- hearing first one, then the other when played again, or a mix of the two sounds.

Poppy Crum, chief scientist at Dolby Labs in San Francisco, said the environment in which one listens, including whether headphones or a speaker are used, affects the intensity of the frequencies, and hence what one hears.

"When there is more energy towards the mid and higher frequencies, people tend to hear 'Yanny'. When the low frequencies are more emphasised, people will hear 'Laurel'," Crum said.

She added that our brains want to "categorize" the elements of speech when they are ambiguous, as in this case passing them either into the "Laurel" box or "Yanny" box. 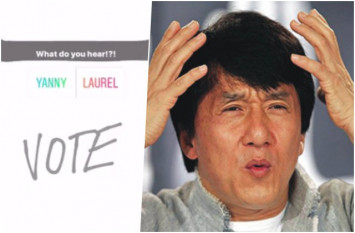 In addition, perception can be influenced by multiple factors such as age, sex or native language of the listener, she explained.

"There really isn't a true reality, there is only our perceptual reality," Crum said.

Jody Kreiman, Professor of Head and Neck Surgery and Linguistics at UCLA, said listeners would normally have "semantic context" to interpret what they are hearing.

"But in this case, we have an isolated sound with no context," forcing people to rely on a variety of other factors such as voices they've listened to recently.

The controversy recalls the similarly impassioned debate that broke out over the #TheDress: in 2015 a photo of a two-toned frock had social media users tearing their hair out over whether its colors were white and gold, or black and blue.