Zinedine Zidane said he never had any doubts about returning to Real Madrid after he replaced the sacked Santiago Solari as coach on Monday.

"When the president called me the first thing I thought was: go," Zidane said at a press conference at the Santiago Bernabeu. "I could not say no, I never had any doubts about going back."

Zidane has been given a contract until June 2022, just nine months after he resigned at the end of last season, having led Madrid to an historic third consecutive Champions League triumph.

Solari's dismissal was expected after three consecutive home defeats - to Barcelona, twice, and Ajax - deemed Madrid's season all-but over before the middle of March.

But Zidane coming back, with only 11 games left in La Liga and almost nothing to play for, is a surprise, particularly after he left on the incredible high of yet another European triumph.

"I left because a change was needed at the end of last season, for the good of everyone, after winning so much," Zidane said.

"I returned because the president called me. I love him and I love this club, so here I am."

Zidane inherits a squad that has evolved even in the short time he has been away, with Cristiano Ronaldo gone and the likes of Thibaut Courtois, Vinicius Junior and Sergio Reguilon all enjoying greater prominence this season. 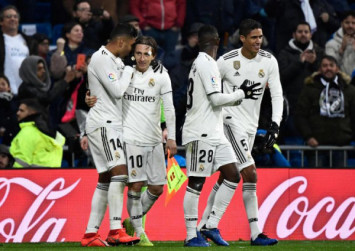 The challenge will be for Zidane to oversee a period of change in the summer, when older players could be replaced and younger talents brought through.

"I do not want to forget what we won but I also do not forget all the things we did badly last year," Zidane said.

"We lost in the league and cup, we won the Champions League, fine, but I know where I am.

"We will change things, for sure, for the years to come. But now is not about that - the important thing is I am back. We will have time to talk with the president, with the club, about what we can do."

Immensely popular with most of the players, Zidane's appointment will almost certainly lift morale in the dressing room, following a week in which Sergio Ramos has argued with the club's president Florentino Perez and been involved in a spat with Marcelo.

Gareth Bale was one of the few to suffer during Zidane's previous spell in charge, with the pair barely on speaking terms in the run-up to the Champions League final.

Bale's future now appears in serious doubt unless their relationship can be quickly repaired.

Instead it was Ronaldo that departed and Zidane now takes over a team missing the Portuguese's goals and in need of reform.

On the possibility of Ronaldo following him back to Madrid, Zidane said: "That is not the issue for today. We have 11 games to play, then we will see. We all know Cristiano, his history at this club is one of the best. But today is not for talking about these things."

Despite Madrid's dominance in the Champions League, there is ground to make up in La Liga, where Barcelona are on course to seal their eighth league title in 11 years.

Madrid sit 12 points adrift of them in the table despite a 4-1 victory over Real Valladolid on Sunday, which proved to be Solari's final game in charge.

Familiar problems, including a lack of goals and a leaky defence, resurfaced in February as a defeat at home to Girona was quickly followed by losses to Barcelona in the league and cup, and humiliation by Ajax in the last 16 of the Champions League.

"I do not blame anybody," Zidane added. "(Julen) Lopetegui and Solari wanted to do the best for the club. It went how it went. The only thing now is to look forward."