The protectors serve as human armour during the procession through Manila of the historic statue of Jesus Christ.

Frenzied crowds, exhaustion and blazing heat were dangers bearing down on the cadre of guards who shield one of the Philippines' most revered Catholic icons from the believers desperate to touch it.

The protectors served as human shields on Thursday, as they do every year, during the procession through Manila of the historic statue of Jesus Christ that believers say grants miracles to those who touch it.

"Our safety is at risk here. Some of the devotees are very aggressive," Steve Celestino, one of the Black Nazarene icon's guards, told AFP Tuesday at a warm-up procession.

The dangers are not theoretical: during the day-long procession temperatures hover at around 32 degrees Celsius and hundreds of thousands of believers clamber over one another to reach the statue.

In 2015 a guard belonging to one of the groups collectively called "hijos" (sons) suffered a fatal heart attack surrounded by sweaty devotees.

Miracles attributed to the Black Nazarene have made it powerfully revered in Asia's bastion of Catholicism, and also engendered a class of admirers desperate to reach it.

"There are two types of faithful: one is a devotee and another is a fanatic," guard Romy Roxas, who said he had been protecting the Nazarene from the latter for 30 years, told AFP on Tuesday.

'YOU'LL FAINT IN THIS CROWD' 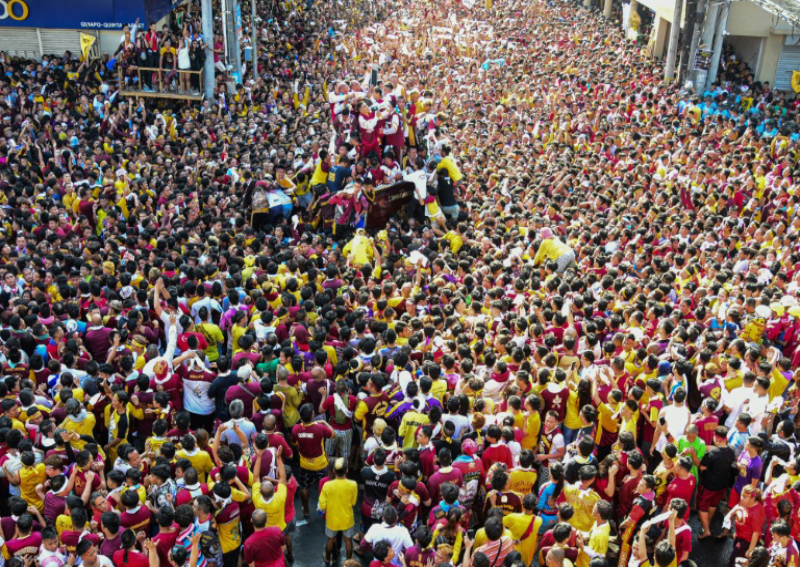 Volunteers are stationed on the float a few dozen at a time and for a couple of hours at most due to the brutal conditions. PHOTO: AFP

Fanatics, he said, clamber up the metal float carrying the life-size statue hoping to snatch a strand of its hair or a piece of its maroon cloak in the belief that it has healing powers.

Guards have to push off the unruly, including those who cling to the statue's cross for too long and risk damaging the several hundred year old wooden statue.

It is a trying job for the hundreds of volunteers, who are stationed on the float a few dozen at a time and for a couple of hours at most due to the brutal conditions.

They are not necessarily security professionals, but rather Catholics in good standing with the Church who offer to help and attend preparatory meetings. 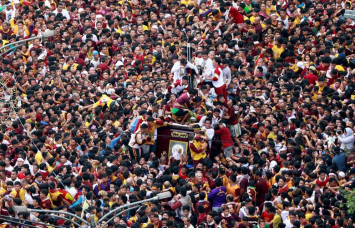 In exchange for the pain, they play a privileged role by catching and then wiping the statue with white towels thrown to them by people in the crowd.

For believers, those swathes of cloth are just as good as touching the effigy itself, and bear healing or blessing effects.

"Somehow, we feel we serve as a bridge for them to fulfil their devotion," guard Eugenio Jongco told AFP on Tuesday.

Jongco, 73, is one of the oldest members of the group and attributed his well-being to his service to the Black Nazarene.

"If you are not in good health, you will faint doing this because of the massive crowd," he said. "But I'll do it as long as I can."