People stand on a bridge amid the coronavirus disease (Covid-19) outbreak in Jakarta, Indonesia, on Sept 6, 2021.

JAKARTA - Indonesia's daily coronavirus positivity rate dropped below the World Health Organisation's (WHO) benchmark standard of 5 per cent this week for the first time, an indicator the country's devastating second wave could be easing.

The positivity rate, or the proportion of people tested who are positive, peaked at 33.4 per cent in July when Indonesia became Asia's coronavirus epicentre, driven by the highly contagious Delta variant.

On Monday that rate fell to 4.57 per cent, the lowest since March 2020, when Indonesia's first cases were reported, according to independent data initiative, Kawal Covid-19.

A rate above 5 per cent indicates coronvirus is out of control, the WHO says.

Kawal co-founder Elina Ciptadi said the trend was a good sign, although she cautioned that official data could not capture a dearth of underreported cases and deaths.

"All in all, what we are seeing is encouraging," she said.

Coronavirus restrictions were eased further on Monday, with most areas on Java island downgraded, allowing conditional operation of malls, factories and restaurants.

But President Joko Widodo urged Indonesians not to be complacent. 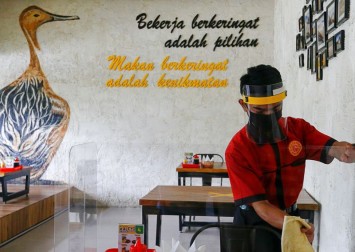 "People need to realise that Covid is always lurking," he said. "When our guards are down, (cases) can increase again."

"I'm both happy and worried about the decline," he said. "There were efforts from the government, but not strong enough to get us out of the crisis period," he said, adding improvements were mostly in big cities.

"We're hoping this good condition can be upheld," he added.