Out of line or out of frame? In this case, it's both.

A new hire of a company in Japan was recently fired for failing to stay within the four walls of his screen during online training, local media reported.

"Mr Yoshida (not his real name) has bad manners," the 23-year-old was told by an HR representative. "At times your chin was not visible, other times you were sticking out of the frame."

His second strike was for wearing a cardigan over his dress shirt, and strike three was because his knee sometimes appeared in the frame.

"We are an IT company that attaches great importance to manners over technology."

New recruits were originally required to attend a welcoming ceremony on April 1. Due to concerns surrounding the current Covid-19 pandemic, they were instead instructed to attend an online training course instead.

As part of the training, Yoshida was instructed to wear a dress shirt and log onto the company chat rooms from home every day, both of which he followed through without fail.

Having joined the company less than a month ago, the young man did not expect that he would be summoned to their physical office, only to be informed of his termination. 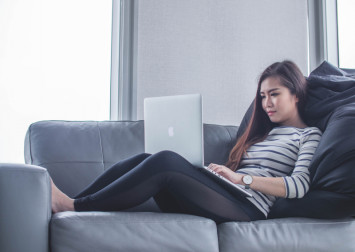 When he asked if it was a violation of regulations for not having his chin visible on the screen, the representative bluntly told him: "Yes."

"I wore a cardigan because I was cold. But because I didn't inform them beforehand, I was wrong," Yoshida explained to the media. "I didn't put my knee up at all, it was a complete misunderstanding."

He was also told that he would be paid for the month of May if he chose to voluntarily resign, but he would not be allowed to attend the training anymore.

While standards for a video call meetings aren't quite as strict here in Singapore (or at least in our company), it's still necessary to maintain professionalism with how videos magnify every single small distraction possible.

Fortunately, there are handy guides out there on how to look good and sound good during video calls, and even how to host meetings like a boss.

Staying at home has become the new norm lately in light of the pandemic. Work, however, must still go on for many of us,...

After all, manners maketh men, even when they're at home.