This file photo taken on June 12, 2018 shows North Korea's leader Kim Jong Un (R) walking with US President Donald Trump (L) during a break in talks at their historic US-North Korea summit, at the Capella Hotel on Sentosa island in Singapore.

North Korea's state media aired a lengthy feature on Kim Jong Un's diplomatic bromance with US President Donald Trump in Hanoi but did not mention that the second summit ended without a deal.

The talks between Trump and Kim last week finished abruptly after the pair failed to reach an agreement on ridding the North of nuclear weapons in exchange for sanctions relief.

In the aftermath, each sought to blame the other's intransigence, with Trump insisting that Pyongyang demanded an end to all sanctions while the North claimed it had only wanted some of the measures eased.

Following the stalemate, researchers said this week that Pyongyang was rebuilding the Sohae long-range rocket site after Kim had agreed last year to shutter it as part of confidence-building measures. 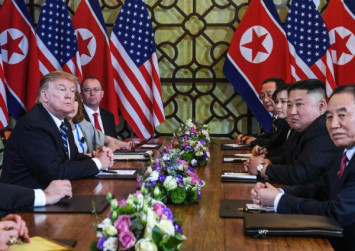 But the North made no mention of these issues in a 75-minute documentary of Kim's trip to Hanoi aired late on Wednesday (March 6) on the official broadcaster KCTV.

A 10-minute clip displayed the unlikely amity between Trump and Kim - a sequel to their first encounter in Singapore last June - exchanging warm smiles and handshakes as they took a poolside stroll around the gardens of the luxury Metropole Hotel, the venue of the summit.

The meeting had reaffirmed that the US and North Korea can overcome their seven decades of hostility, KCTV said, and "open a new future" if they come to negotiations with "a fair proposal".

The feature showed Kim, puffing a cigarette, holding a late-night meeting at his hotel with his aides on the eve of his summit with the US president.

Read Also
Fags and food: 5 things we learned from the Hanoi summit 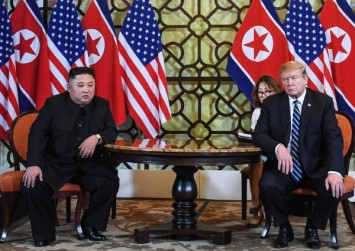 KCTV did not refer to the pair's discussions on denuclearisation - the key sticking point between Washington and Pyongyang - but said the two had agreed "to continue productive talks to resolve pending issues".

"The second summit was an important opportunity to deepen respect and trust for each other and to bring the two countries' relations to a new level," KCTV said, showing Trump patting Kim on the arm as they shook hands before parting ways.

Standing in the hall of the Metropole Hotel, Trump shook hands with the North Korean delegation and a smiling Kim appeared to tell the US leader, "Let's meet again".

The documentary showed Kim's trip to Hanoi in chronological order, from his departure at Pyongyang train station to his early morning return to a cheering crowd.

It also featured Kim's official visit to Hanoi - from March 1 to 2 - including old clips of meetings between his late grandfather, North Korea's founder Kim Il Sung, and Vietnam's independence hero Ho Chi Minh in 1958 and 1964 to highlight the countries' decades-old friendship.