People wait in a line to undergo coronavirus disease (Covid-19) testing at a temporary testing site set up at a railway station in Seoul, South Korea, on Dec 8, 2021.

South Korea leads the world in newly reported cases in the last seven days, according to WHO data.

The vast majority of South Korea’s eligible population has been vaccinated and boosted, and despite the record number of infections in the country of 52 million people, death rates remain very low.

The country has also continued to relax its social distancing rules, under pressure from small businesses and self-employed Koreans who say years-long Covid restrictions had pushed their businesses to the brink.

South Korea now has a 11pm curfew for businesses and a six-person limit for private gatherings.

It will lift mandatory quarantine on arrival for fully vaccinated visitors from March 21.

The government is expected to decide whether to further relax or keep the current distancing guidelines on Friday.

The figure was slightly lower than expected by economists polled by Reuters, who had forecast production-based growth of 3.2 per cent for the quarter. 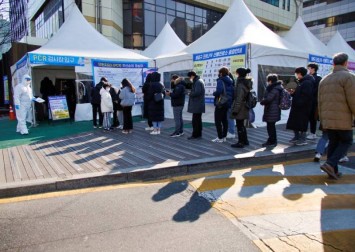 The rise follows a revised 3.6 per cent fall in the September quarter, when lockdowns curbed activity.

Annual GDP rose 3.1 per cent, below a Reuters poll forecast of a 3.3 per cent rise.

Economic growth improved in the fourth quarter as New Zealand’s largest city, Auckland, moved out of a lengthy lockdown that had hit retail, manufacturing, construction and recreational activities in the prior quarter. Other parts of the country had also experienced shorter lockdowns in the third quarter.

Consumer and government spending were strong as was business investment, while trade was a drag as the country sucked in more imports, the data showed. There was also a big drag from inventories as companies ran down stocks to meet demand, according to the data.

New Zealand’s economy is being hit again this year as the country experiences its first significant nationwide outbreak of coronavirus infections.

Although there are few restrictions in place, growing case numbers and hospitalisation have tempered people’s desires to go out while sickness and isolation requirements are hurting some manufacturing sectors.

Concerns of an overheated economy and rising inflation have prompted the Reserve Bank of New Zealand to raise interest rates three times in recent months. The market expects further hikes in the coming months.