According to campaigners, abortion has been commonplace in South Korea and it has unfairly targeted mostly young, unwed women.

South Korea's constitutional court on Thursday ordered the country's decades-old abortion ban to be lifted in a landmark ruling over a law that campaigners say puts women at risk.

South Korea remains one of the few industrialised nations that criminalises abortion, except for instances of rape, incest and when the mother's health is in jeopardy.

But the nine-member bench ruled by seven to two that the 1953 statute aimed at protecting lives and traditional values "goes against the constitution" and ordered the law to be revised by the end of next year.

"The abortion ban limits women's rights to pursue their own destinies, and violates their rights to health by limiting their access to safe and timely procedures," the court said in a statement.

"Embryos completely depend on the mother's body for their survival and development, so it cannot be concluded that they are separate, independent living beings entitled to rights to life."

Bursting into tears of joy and celebrating, hundreds of women -- including teenagers and females with disabilities -- cheered wildly in front of the Constitutional Court in central Seoul, where the official ruling was announced.

"Women deserve to be happy as much as we want to be today," activist Bae Bok-ju told AFP.

"Today's decision was made because countless women ceaselessly fought for their rights for so many years. We deserve the world's attention and we deserve its recognition," Bae added.

Under the ban, women who undergo the procedure can face up to a year in jail and a fine, while doctors who performed the procedure are given two years in prison.

The 1953 law had been widely flouted and rarely resulted in prosecutions, but activists had claimed it left women facing being unable to pay for terminations, unsafe procedures and social ostracisation.

Under Thursday's ruling, the ban will be automatically lifted on Jan 1, 2021 unless new legislation is introduced sooner by parliament to follow the court order.

Calls to repeal the law had gained traction as the country's growing feminist movement gathered momentum, but support for the ban had also been staunch in a country that remains conservative towards female sexuality and highly influenced by evangelical Christianity.

The constitutional court last upheld the law in 2012, saying that abortion would "end up running rampant" if not punished.

Seven years later and an opinion poll on Wednesday showed 58 per cent of the public are in favour of abolishing the law. 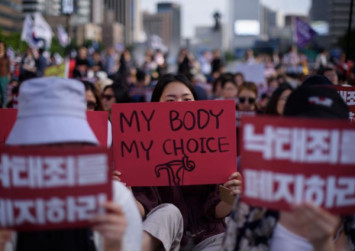 Thursday's ruling was made after a woman doctor who was prosecuted for performing almost 70 abortions filed a challenge in 2017.

According to campaigners, the procedure has been commonplace in South Korea and it has unfairly targeted mostly young, unwed women -- who are most vulnerable to abortion-related stigma in the country.

Teens who fall pregnant are often forced to discontinue their studies, or transfer to remotely-located educational institutions, according to youth rights groups.

Women with disabilities, on the other hand, are often forced to undergo abortion against their will by family members -- which, according to disability rights campaigners, demonstrates the country's selective views about which lives matter.

Also under the ban, rape victims need "proof" that they were raped, or -- in the case of their health at jeopardy -- are required to get permission from their partners, often causing lengthy and risky delays.

Religious belief is widespread in South Korea, and some of its evangelical mega-churches are among those defending the ban.

The Catholic Bishops Conference of Korea expressed "deep regrets" saying, adding: "The ruling denies the rights to life of embryos who do not have the ability to defend themselves."

"For one, we have to make sure that the procedure will be covered by the national health insurance," Kang said.

"Without it, many women's health will continue to be in danger.

The country's doctors also welcomed the decision with the Korean Association of Obstetricians and Gynaecologists saying: "This ruling will ensure women's rights to health."

One campaigner, Lim -- who had kept her abortion experience a secret for more than 25 years -- said the court's decision will allow women to make their own decisions about their future without the fear of being shamed.

"Keeping my abortion a secret has been making me feel unnecessarily guilty for all these years," said the 50-year-old who asked for her forename not to be used to protect her anonymity.

"I want to see a different future for the next generation."