Soldiers hold their weapons at a checkpoint in the troubled southern province of Yala, on Feb 28, 2013.

BANGKOK - Dialogue between the government and the main rebel group fighting an insurgency in Thailand's Muslim deep south have resumed, participants said on Thursday (Jan 13) with both sides expressing hope for peace after a two-year break in talks.

The government delegation and representatives of the Barisan Revolusi Nasional (BRN) took place on Monday and Tuesday in Kuala Lumpur, Malaysia, the first contact since the process was halted due to the coronavirus pandemic.

More than 7,300 people have been killed in bombings and shootings since 2004, when a decades-old rebellion flared up in the provinces of Narathiwat, Yala and Pattani, a predominantly Malay-speaking Muslim area in majority Buddhist Thailand.

Among the topics discussed was finding a political solution, reduction of violence, a public consultation processes and the establishment of mechanisms for future talks that would "allow the two sides to have meaningful and flexible discussion with tangible outcome," Thailand's government said.

The BRN said it supported dialogue that it hoped would continue and lead to "true and dignified peace" in the area.

Shadowy rebel groups have called for independence for the border provinces, which were part of a sultanate called Patani, annexed by Thailand in 1909 as part of treaty with Britain. 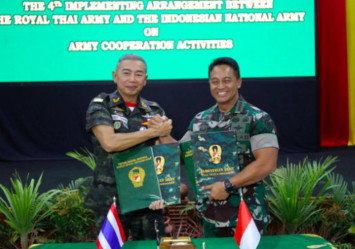 Separatists have long complained Malay Muslims were forcibly assimilated by the Thai state have and accused Thai security forces of past atrocities. The military has defended its operations in the area.

The talks started in 2013 and have been fraught with disruption, including a military coup a year later then resumptions without key stakeholders, including BRN.

Dialogue restarted in 2019, leading to formal peace talks brokered by Malaysia in early 2020, but those were derailed by the pandemic.