Thai durian tycoon Anon Rodthong has put an end to his, and his daughter's rather thorny matter.

Anon said on Wednesday (Mar 6) that he was cancelling the tournament he had announced earlier in the week to help sift out 'the one' from 10,000 potential suitors.

The businessman reportedly said that the public's interest had become too disruptive to his family and business, adding that he still intended to give the 10 million baht (S$425,300) to whoever marries his daughter.

News of Anon searching for a potential son-in-law, who would be rewarded with the cash prize along with his durian empire, went viral since the Facebook announcement was posted on Saturday (March 2). 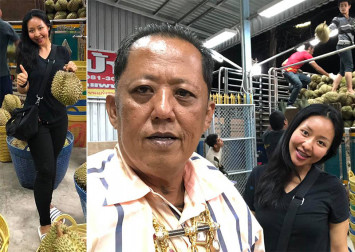 By Tuesday (March 5), the entrepreneur said he already had "over 10,000 applicants", and would hold a three-month tournament starting April 1.

But it seems the overhelming response proved too much for the pair to handle, leading to the cancellation of the meet-up.

Some observers, however, have raised doubts about the authenticity of the proposal. A lawyer who spoke to Thai media said that Anon could run into legal trouble if the whole set-up is found to be nothing but a marketing ploy.