Nippon Medical School Hospital's ICU doctor Shoji Yokobori watches weightlifting at a medical station of Tokyo International Forum during the Tokyo 2020 Olympic Games, where he works as an emergency medicine officer overseeing the venue in Tokyo, Japan on August 2, 2021.

TOKYO, Japan - After more than a year at the frontline of the coronavirus pandemic, Japanese emergency doctor Shoji Yokobori finds himself at the unlikely calm of the Olympics, overseeing a venue with strict protocols, no spectators and low infection risks.

A volunteer medical officer at the Tokyo Olympics weightlifting venue, Yokobori and a team of around a dozen other medical staff are yet to see a major injury, let alone a coronavirus outbreak.

It's a world apart from the strain of his regular job running the intensive care unit at Tokyo's Nippon Medical School Hospital, fighting a fifth wave of the pandemic that is pushing the city's medical care system to the brink.

"I am now living in two different worlds," said the 47-year-old director of the hospital's department of emergency and critical care medicine, wearing a pink medical vest as he stood in the quiet of a near empty Tokyo International Forum.

"When we go back to the real world, like in the hospital, we see the many patients of Covid-19," Yokobori said. "It is like heaven or hell, I don't know."

Yokobori's dual existence illustrates life at the two extremes of Tokyo's Olympic "bubble". Games organisers are running a village for athletes and coaches where more than 80 per cent are vaccinated against the coronavirus, testing is compulsory and movement is stringently curtailed. 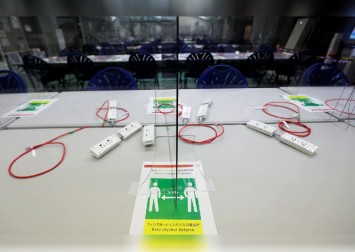 In the broader Japanese capital, vaccination rates remain low and protocols around testing and movement are nowhere near as strict.

Yokobori's hospital was chosen to help with the Olympics given its reputation for emergency care and Yokobori, a fan of tennis player Naomi Osaka, said he was happy to volunteer.

He makes rounds of the cavernous venue's medical stations, checking in and sometimes assigning nurses to take athlete blood samples for doping tests. The lack of spectators cuts the workload, volunteers said.

But Yokobori also takes urgent calls from his staff at the hospital, seeking advice on issues like whether to use lung support for critical Covid-19 cases.

A spike in cases fuelled by the Delta variant this week led Prime Minister Yoshihide Suga to announce that only seriously ill Covid-19 patients would be admitted to the hospital, raising fears of an increase in deaths.

Back to the front

Yokobori was back on the floor of the hospital intensive care unit on Sunday, when he had a day off from Olympic duties.

Just after he told Reuters there was only one ICU bed left for severe Covid-19 cases, another patient was admitted, taking the last of the allotted ten beds.

Yokobori said he was particularly worried about the spike in cases involving younger patients, who took longer to treat, tying up beds longer.

"We still don't know when it will peak out. That's why we are afraid," Yokoburi said as he monitored live video of patients in the ICU's 60 beds.

One doctor at another Olympics venue is considering quitting his volunteer work at the Games to return to his hospital to ease the burden on colleagues, according to public broadcaster NHK.