Trump, Kim mind their body language with a handshake of equals

SINGAPORE/SEOUL - North Korean leader Kim Jong Un and United States President Donald Trump were at pains to show they were getting along in the well-choreographed first moments of their meeting in Hanoi, body language experts said.

The first images of their meeting in the Vietnamese capital showed them both walking towards each other against a backdrop of intertwined flags, hands outstretched, before they clasped and turned in sync to face the flashes of the assembled media.

"They are both making an effort to show their relationship has improved since the last time," said Mr Allan Pease, an Australian body language expert and author of several books on the topic. "The mirroring between them is quite strong."

Mr Pease said "mirroring" was how people who want to show that they have a rapport imitate each other's body language to put the other at ease.

Both of the leaders sought to project a sense of command with "alpha male" handshakes when they met in Singapore eight months ago, but displayed some anxiety in their first moments. 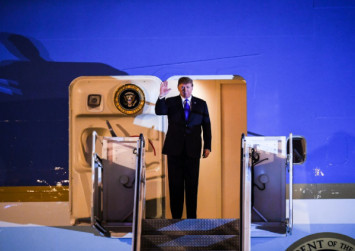 Mr Trump has since declared he and Mr Kim "fell in love" after exchanging letters, a far cry from the threats and insults traded in late 2017 when Mr Trump called Mr Kim "Little Rocket Man" and a "sick puppy", while Mr Kim said Mr Trump was a "dotard" - an archaic word meaning senile old person.

From the handshake to the first meal, here are the differences between the Hanoi and Singapore Trump-Kim summits. http://str.sg/oa7Z

Posted by The Straits Times on Wednesday, February 27, 2019

"Kim was walking towards Trump far more briskly with his hand extended. Previously in Singapore, Kim was far more hesitant. There is much more sense of familiarity," said Ms Leong, managing director of Singapore-headquartered Influence Solutions and author of the book Win People Over.

"Trump wants the rapport. He is not here to become the bully, he is here to win Kim."

There were signs of tension, however, when the two men sat down after the initial handshake.

Mr Pease noted that Mr Trump - sitting in his traditional, dominant position with hands forward making a steeple shape - furrowed his brow. Mr Kim's fingers were clenched in his lap, a position that shows frustration and self-control.

"They both smiled only when they were expected to, and how they practised it. They were performing," he added.

The summit in Singapore marked the first time a sitting American president met a North Korean leader, but the vague agreement struck to work towards complete denuclearisation of the Korean peninsula has produced few concrete results.