A handout photo. Jala, a male adult orangutan, lies while getting anesthesia for medical tests before being released back into the wild by conservationist group International Animal Rescue (IAR) Indonesia and country's environment and forestry ministry agency to the conservation forest of Tanagupa, part of Gunung Palung National Park, in North Kayong regency, West Kalimantan province, Indonesia, on May 4, 2021.

An adult male orangutan has been released into an Indonesian national park by conservationists and the government after he was caught eating a villager's coconut plants on Borneo island.

As the orangutan habitat diminishes due to land use, conflicts between communities and the great apes have increased. Indonesia has designated several areas in Kalimantan as safe havens for Borneo orangutans, which are on the World Wildlife Fund's endangered list.

Conservationists found Jala eating a villager's coconut plants after residents reported seeing the orangutan near their gardens in March.

They monitored the ape, whom they estimated to be about 15 years old, for a month before transporting him to the Tanagupa conservation forest in the Gunung Palung National Park, in west Kalimantan.

At the end of the lengthy journey, including a boat ride into the jungle, Jala bounded out of the transport crate and climbed nimbly up a tree.

Karmele L. Sanchez, director of the International Animal Rescue Indonesia conservation programme, thanked the village residents for reporting the orangutan rather than taking action themselves.

"We are very happy that people are aware and understand how to deal with potential conflicts of this nature," she said. 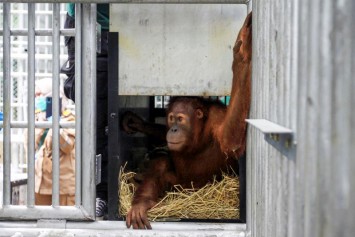 Jala's arrival marks the second relocation of an orangutan to the national park this year, a park official said.

Survey results and habitat feasibility studies have deemed Tanagupa forest a suitable area to resettle orangutans, as it is far from human settlements, has an abundance of foraging plants and a low density of resident orangutans.

Conservationists hope the dedicated habitats will help sustain Indonesia's orangutans. There are an estimated 104,700 Bornean orangutans, less than half the 230,000 a century ago, according to the World Wildlife Fund.