Beauty comes at an eye-opening price. Quite literally, in this case.

Plastic surgery might be increasingly commonplace in today's society, but while it's helped rebuild confidence and self-esteem, it comes with a fair share of controversies.

Despite spending 12,800 yuan (S$2,500) on an operation that should have given her double eyelids, a lady in Hefei, China, had her worst nightmares realised when she wasn't able to close her eyes post-surgery.

In an interview with Pear Video, Li shared how she had originally gone to a clinic to have something done about her swollen eyelids. As she found the results of the first surgery to be unsatisfactory, the clinic offered to perform a second corrective surgery, which resulted in her current appearance.

The clinic offered to carry out yet another corrective surgery, but Li adamantly refused.

"It's very obvious they didn't do a good job for me. They didn't make me look better, they made me look worse," she fumed.

As a result of being unable to close her eyes, Li lamented that her vision has since gone blurry and that she can only roll her eyes upwards in to get some shut-eye.

The clinic, however, insisted that her condition was perfectly normal and that she would slowly recover. 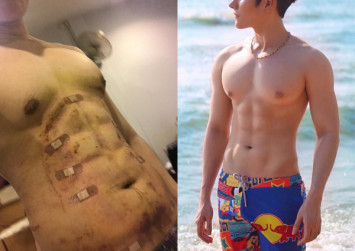 They explained that it was just a result of having done two consecutive surgeries. By conducting a second surgery before her scars from the first surgery could completely heal, it caused her scars from both operations to fuse together.

Li had demanded the clinic to refund her the money she had spent on the surgeries, as well as provide compensation for the amount she would have to spend on recuperating. After much negotiation, the clinic agreed to compensate her 30,000 yuan (S$5,809).

If it's any form of consolation, at least she might still be able to pass through facial recognition scanners.

#Plastic surgery / Aesthetic treatment #china #In Case You Missed It