Charles Yeo’s time in the spotlight may be over, now that the general election’s done and dusted, but the 30-year-old Reform Party member still has fans rooting for him.

The criminal defence lawyer saw unexpected support from Ho Ching herself on Saturday (July 11). The wife of Prime Minister Lee Hsien Loong urged folks not to ridicule Yeo for his noble attempt to deliver his party’s campaign message in Mandarin during a political broadcast that saw him becoming the subject of several memes. Memes that Ho doesn’t want people to circulate.

Another surprise fan of the young politician? The chief of homegrown gaming hardware brand Razer, Tan Min-Liang, who wants to send over some sweet gear to Yeo. But it was an offer that the RP member has politely turned down out of his political credo.

“You may laugh at him but he’s a man of principles!” photographer Lim Weixiang pointed out on Facebook. According to Lim’s post, the Razer CEO made a call out to anyone who knew Yeo personally, wanting to “seed that guy some Razer gear for his performance”.

The gift that Tan wanted to send over is a custom Razer mousepad with the words “How can this be” in Chinese etched on it. It was in reference to a portion of Yeo’s speech in the political broadcast, where he mentioned that the ruling People’s Action Party (PAP) subscribes to Confucian ideals but it still made senior citizens work for a living. The phrase, apparently used wrongly, has become a meme of sorts online.

Gaming gear wouldn’t be farfetched gifts for Yeo, who’s an avid gamer. In RP’s first unveiling of its general election candidates, technical issues during their Facebook Live stream forced Yeo to use his personal Nvidia GeForce account to broadcast their speech online, revealing his library of video games.

Not to mention that he’s been busy catching up on a lot of Dota 2 since the elections are over.

Our memelord Charles Yeo in his natural habitat

‘I would have to stay true to my beliefs’

Tan’s offer, however, has since been turned down by Yeo out of principle — but not due to allegations that the Razer CEO has been abusive to his employees. Instead, the RP member stated that he is a former Razer fan who started to boycott the company due to its links to the establishment in Singapore.

Razer receives funding by state investment company Temasek Holdings, which is helmed by Ho. Yeo also remarked that he was informed that Tan is a “vocal supporter of the PAP”, which the RP team took on and lost to in their bid for Ang Mo Kio GRC.

“I’m sure you have your fans, but I hope you understand that I would have to stay true to my beliefs,” Yeo wrote in response.

Tan replied that he’s “actually generally apolitical” but congratulated Yeo on tackling the Mandarin portion of his speech on TV. The RP election candidate had revealed that he only had 15 to 20 minutes to prepare as party-mate Darren Soh — who was supposed to deliver the message in Mandarin — had fallen ill. 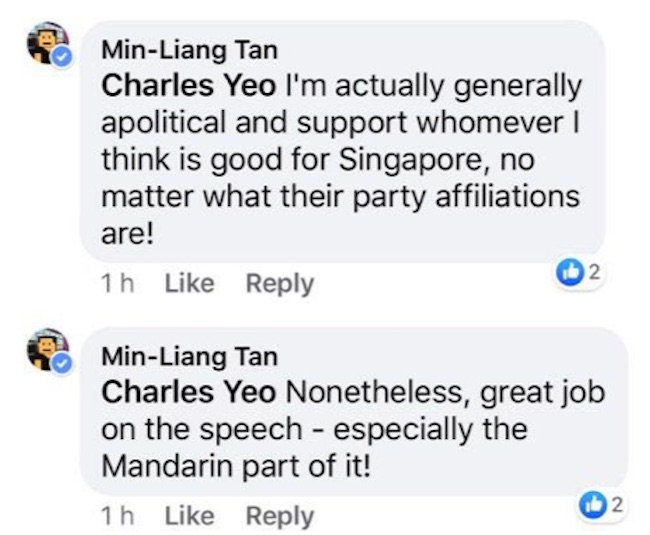 Regardless of free Razer peripherals or general election losses, Yeo seems to be pretty happy just playing Dota 2, judging from his spate of gaming live streams on Facebook.