A poem about a viral outbreak called Gone Viral has gone viral online. And it’s penned by a Singaporean literature teacher, too.

Ow Yeong Wai Kit, a published poet and a literature teacher at Bukit Batok Secondary School, published on Friday a poem about the country’s reactions to the ongoing coronavirus outbreak.

It’s not just the title that contains dual meaning — his composition is crafted in the multi-layered format of the twin cinema poetic style, created by Singaporean poet Yeow Kai Chai. Such poems consist of two discrete columns of poetry which can be read separately as vertical writing or horizontally together across the columns.

No matter which way you read it, the poem is coherent. And coherence of varying views is something that Gone Viral’s creator wants readers to take away. The poem, according to Wai Kit, dramatises the dialogue between voices that adopt opposing perspectives. 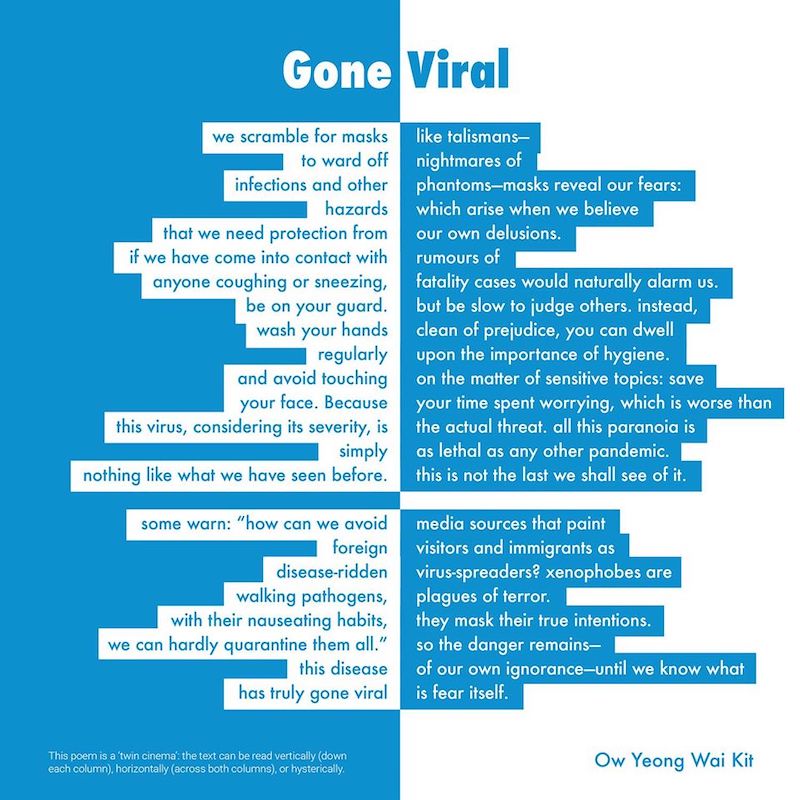 “I hope that poems like these can inspire students to consider alternative points of view, and to deepen their empathy for others,” wrote the teacher, as quoted by the Ministry of Education (MOE) in a Facebook post.

"Ours is a polarised age in which so many voices, both online and offline, can sometimes be so stridently self-assertive, so belligerently self-righteous. (Especially when discussing foreigners)," Wai Kit wrote on his personal Facebook account. "I think our civil discourse can afford to be, well, even more civil — kinder, gentler, more open to different perspectives."

As of writing, the post has already garnered thousands of reactions and shares on social media with most commenters praising the composition.

“Teachers are also at the frontline — the line between caring and careless actions, between heartfelt and heartless words — and this fantastic poem shows how great our teachers are at doing this ‘heart’ work!” noted one netizen.

More musings of Wai Kit can be found on his website. For something less literary, there’s always the MOE-endorsed music video that’s meant to educate children about hygienic habits during these concerning times.