The unrest over issues of injustice in the United States has had a far-reaching effect across the world. Even Singapore’s social media influencers — typically apolitical — are expressing solidarity with the Black Lives Matter movement to speak out against racism.

But bigotry very much exists right here, with a portion of Singaporeans expressing prejudice against people from other backgrounds and countries.

Though the stress of the Covid-19 outbreak on social faultlines was something that Minister for Culture, Community and Youth Grace Fu addressed over the weekend, it didn’t take long for displays of racism and xenophobia to pop up again. Case in point: the uproar and snark in response to the government’s plans to build new foreign worker dormitories with better standards. Some of which will be built near residential estates.

The announcement is excellent news, of course. Since the coronavirus outbreak here, Singapore’s treatment of the migrant worker population and their living conditions have been in the spotlight, and became a cause of concern even beyond our shores.

But now that the standard of living for migrant workers — who make up most of Singapore’s manual labour workforce — will soon improve, some netizens have made some crusty comments about this development.

Evidence of outright prejudice has surfaced across social media. “There is no end to the dehumanising entitlement, contempt, and plain public racism of these people,” denounced Facebook user Joel Tan, who compiled screenshots of “truly appalling” comments by Singapore netizens.

Another Facebook user, Shawn Lim, noted that Singaporeans should reflect on their own bigotry before expressing outrage at the death of George Floyd.

“These migrant workers built the homes you so comfortably live in and type these racist comments from,” he wrote in a post.

“You are the beneficiary of their hard work and yet you want them to be out of your sight and out of your mind?” 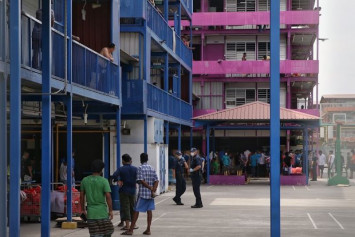 It is exactly this “not-in-my-backyard mindset" that National Development Minister Lawrence Wong urged Singaporeans not to have when he unveiled the government’s plans on Monday (June 1).

“We have to appreciate the work the migrant workers are doing and welcome them as part of our community,” said the minister.

“This is an important part of how we can learn from this whole experience and become a more inclusive society.”