It would seem that after more than a few memes were made in relation to her past as Singapore’s first female general, newly elected Marymount SMC Member of Parliament (MP) Gan Siow Huang has taken it all in stride.

In particular, the 46-year-old has embraced the wisecracks that she would command her residents to report for morning military physical training through 5 Basic Exercises (5BX) sessions.

A highly familiar acronym for recruits in the Singapore Armed Forces, 5BX typically starts sharply at 5.45am during Basic Military Training, where they’ll get their gears moving with a series of jumping jacks, high jumps, crunches, push-ups, and a spot of running.

The memes widely shared online during the course of this year's general election involved Gan enforcing strict military routines in her constituency. Her tough-as-nails exterior and her rousing Nomination Day speech served to reinforce the impression that she would indeed be just as fierce as an MP for Marymount SMC.

Last Saturday (July 25) morning, not only did Gan go for a run in Bishan Park with friends — she leaned into the joke.

“Morning run followed by a hearty breakfast in Bishan Park with friends. And it was not 5BX,” she noted with a wink.

Morning run followed by a hearty breakfast in Bishan Park with friends. And it was not 5BX.😉 #marymount

Netizens didn’t miss the moment, welcoming her humour in the comments section. 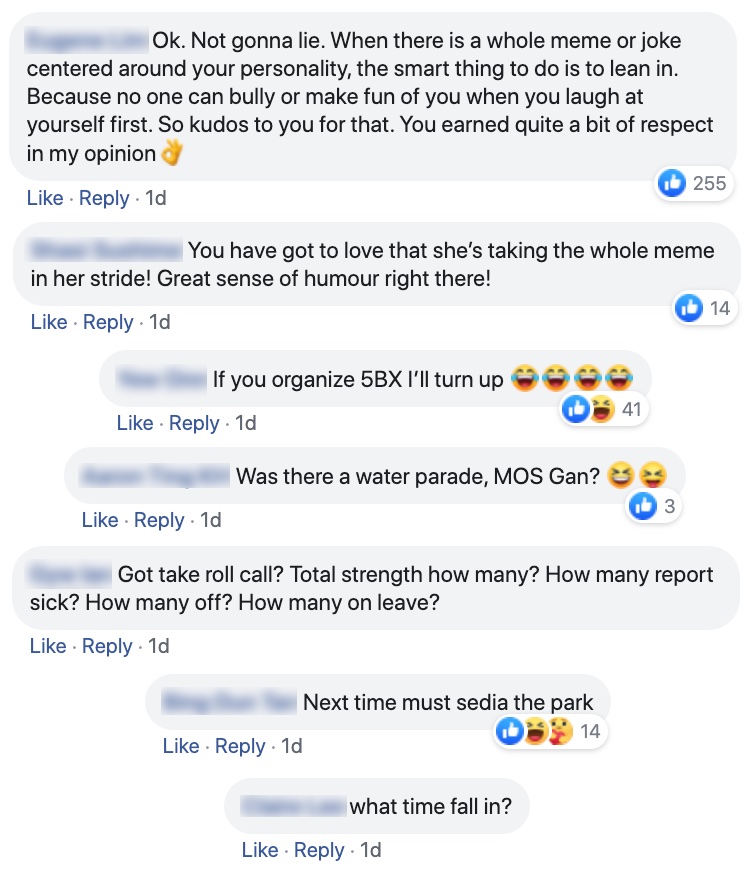 Gan has acknowledged before that she’s yet another SAF officer who changed tracks and entered politics but maintained that military people shouldn’t be stereotyped.

“I believe that my experience and the values that I gained in the SAF, especially in leading and taking care of people, will enable me to serve the residents of Marymount well,” she said during her constituency political broadcast speech.