Patrick Lee has a surprise marriage, just two years after he broke up with an ex-girlfriend of eight years.

It's been about two years since Taiwanese actor Patrick Lee ended his eight-year relationship, but all we've had so far is radio silence — apart from some Instagram snaps that tease his new bae.

However, Patrick dropped a bombshell yesterday (July 6) with a surprise marriage announcement.

In an Instagram post, the 42-year-old shared a picture of him holding hands with another person, both wearing matching white-and-gold rings.

If you had any doubts, Patrick also wrote "Mr and Mrs Lee".

The news might come as a surprise to his fans, considering that Patrick kept a tight lid on this relationship.

A few hours after his post, modelling agency Catwalk, which manages Patrick, also expressed their congratulations to the happy couple. They also shared a few more images of the newly married couple.

In one image, the back profile of Patrick and his wife can be seen as they hold hands and walk down a street.

In another, Patrick can be seen taking a selfie while holding hands with the unnamed woman, alongside an image of two ring boxes with Bulgari ribbons tied around it.

According to a report by Apple Daily Taiwan, these Bulgari rings cost NT$58,000 (S$2,700). A quick search shows that these rings sell for about $2,720 including taxes in Singapore.

An unexpected party also gave her well-wishes as it was reported that Patrick's ex-girlfriend of eight years, actress Janel Tsai, said: "I wish him happiness."

More than a year ago, Patrick was accused by Elvin Ng's fans of bullying.

In April last year, on local talkshow The Inner Circle, Elvin, 41, claimed that one of his co-stars had been antagonistic towards him while they were shooting in Kuala Lumpur. Although he declined to provide a name, many fans pieced it together and pointed fingers at Patrick. 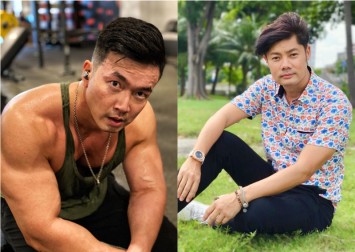 Responding to these claims, Patrick snapped back: "A Taiwanese, travelling alone to a place where Singaporeans are everywhere and bullying a Singaporean? Where is the logic in this?"

But more allegations of his bad character surfaced following Elvin's anecdote as 50-year-old local host Danny Yeo shared that Patrick had been rude to him once.

Said the host: "In all my years of hosting, Patrick Lee is the only celebrity who has yelled at me and it was in the cinema. In front of everyone, he shouted at me to 'get lost!'"

Although Patrick didn't directly respond to Danny's revelation, he did post screenshots of multiple direct messages from people who praised his character and thanked him for helping them.

"Relationships between people are mutually beneficial," Patrick said in a reply to one of the messages. "Let there be light."