The sudden passing of Alien Huang has taken the entertainment industry by storm and its ripple effect can be felt even on our shores.

Numerous local celebrities have taken to social media to share their personal memories of the 36-year-old and how much they'll miss the late Taiwanese celebrity, who went by his stage name 'Xiao Gui' (Little Ghost). He had acted in three Singapore productions.

Actress Pan Lingling posted a video of a touching reunion between Alien and Chew Chor Meng, taken two years ago. Both played father and son in the 2012 Channel 8 drama Joys of Life.

Alien had arranged with Lingling in advance to surprise Chor Meng with a visit to the latter's mookata stall when Alien was in the country. In the video, Alien shouted "Pa (Father)" when he saw the veteran actor, and both hugged each other tightly in happiness.

Lingling wrote: "I've been watching this two-year-old video on repeat, and how this onscreen father-son duo had such a strong bond offscreen. My heart is in so much pain."

On his Instagram, Chor Meng posted a black-and-white photo that he took with Alien that day, saying: "I'll never get to hear you call me 'Ah Pa' again."

Local actor Andie Chen — and Alien's co-star on Joys of Life — also took to Instagram to grieve for his dear friend, whom his children call 'Uncle Xiao Gui'. The two got closer after Joys of Life and Andie told AsiaOne that they would meet up whenever they were in the same country — either Singapore or Taiwan.

He has yet to tell his kids Aden and Avery about the death of 'Uncle Xiao Gui' even though he was "a bit tempted" to do so after they saw him reading an article about Alien and called out for him.

Andie explained: "I was contemplating whether to tell them but I feel like emotionally, I'm not done digesting my own emotions so I would think that it might be a better idea for me to settle my emotions first before being able to communicate with them properly."

He also told The Straits Times that he is currently in Taipei for work and intends to pay his respects at Alien's wake. Both didn't get the chance to meet as Andie completed his quarantine just last week.

Here are other celebrities who have posted their tributes to Alien.

Alien was the lead in Michelle's feature film directorial debut Already Famous (2011). On her tribute, she wrote: "I can't believe this. You'll always be the first male lead in my life."

#RuiEn: It's taken me 24 hours to be able to put this into words. I don't know how this year can get any worse but seems it’s trying its best. Am heartbroken. He was full of light and life even at the end of 16-hour days. They say God sends people into your life to teach you things. Am so grateful I got the chance to be audience to the light that shines from within him, even if for a little while. Please pray for his loved ones. As much as 2020 has been a year of grief, it has also been a year of light, the same kind that he has, and that he wouldn't want us to give up on. @aes_alien #xiaogui

Rui En played Alien's love interest in Joys of Life. On her fan club's Instagram account, she wrote in a post: "It's taken me 24 hours to be able to put this into words. I don't know how this year can get any worse but seems it's trying its best. Am heartbroken. He was full of light and life even at the end of 16-hour days." 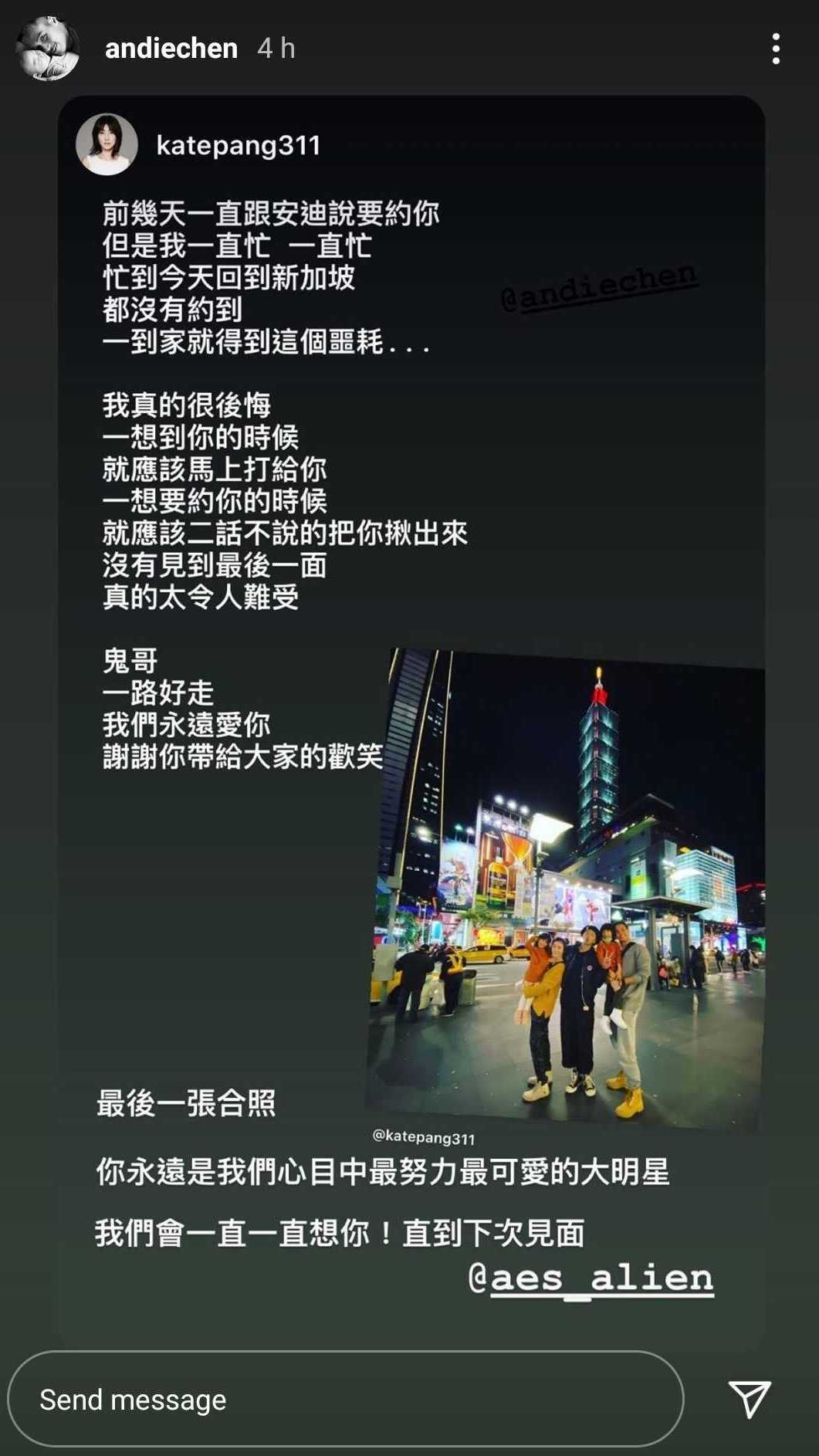 On her Instagram story, Kate (who was Alien's co-star in Joys of Life and Andie's wife) said: "A few days ago, I was telling Andie that we should meet up with you. But I've been busy until I returned to Singapore today and we didn't get to meet. And I got the bad news when I reached home. 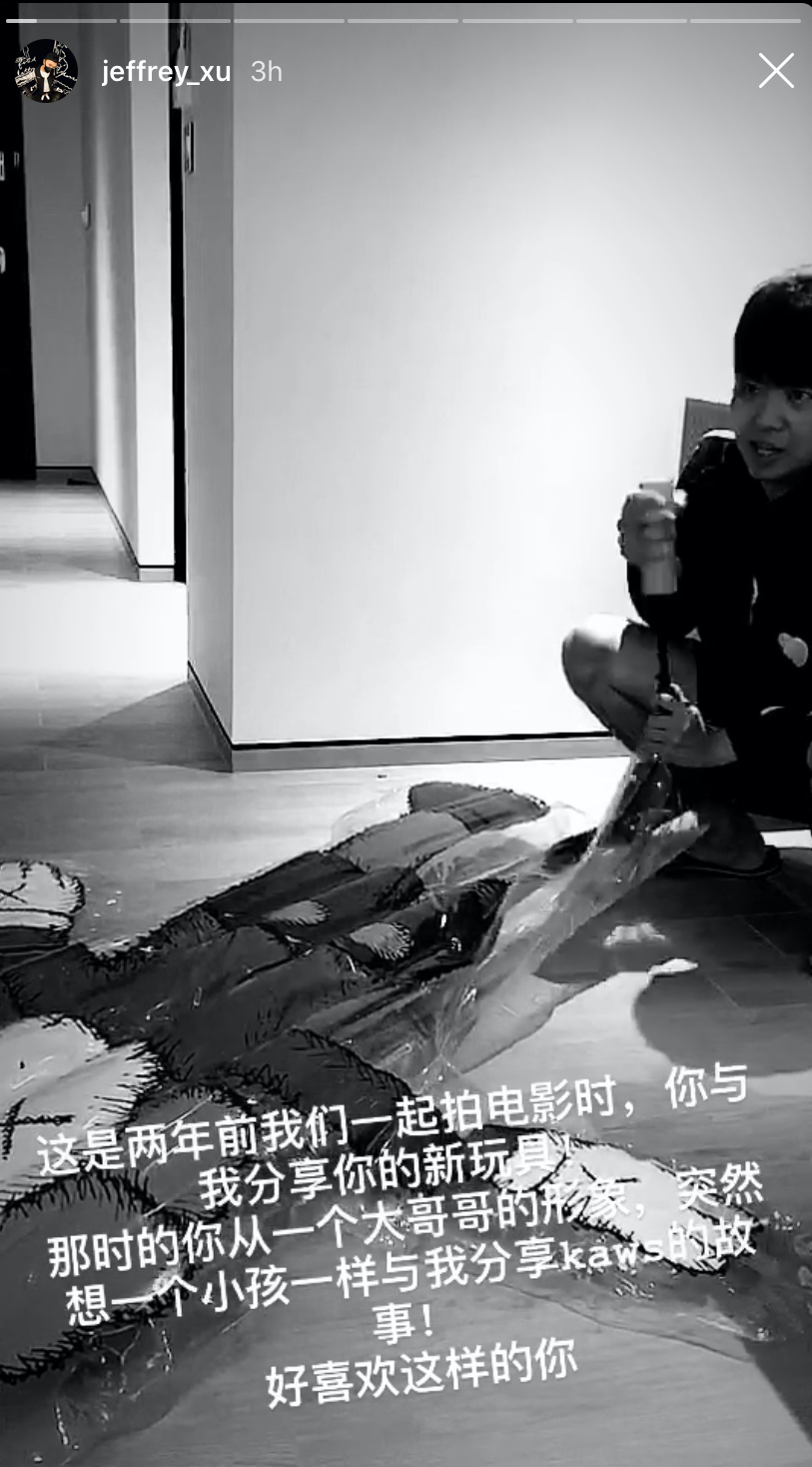 Jeffrey, who co-stars with Alien in Encore Films' upcoming film Fat Hope, took to Instagram Stories to share a video of Alien. He wrote: "This was taken two years ago during filming when you were telling me about your new toy.

"At that time, you turned from a 'big brother' into a child as you shared with me the story of Kaws. I really love this side of you."

Jeffrey also posted a video of him singing karaoke with Alien and said: "I will keep this beautiful memory in a corner of my heart. When I think of you, I will watch it to cry a little, and laugh a little."

Encore Films also took the opportunity to share their tribute to Alien. They said: "We mourn the loss of our dearly beloved Alien Huang, a highly gifted artiste, a true industry professional, and a uniquely special individual.

"On behalf of all our staff and all the cast and crew members of Fat Hope, we would like to offer our deepest sympathies and heartfelt condolences to Alien's family and loved ones for their tragic loss."

Fat Hope will be released posthumously and is currently scheduled for a release during Chinese New Year next year.

We mourn the loss of our dearly beloved Alien Huang, a highly gifted artiste, a true industry professional, and a...