Han So-hee ditches girlish image for 10kg of muscles for new Netflix drama, and other K-stars with big transformations

Having first risen to popularity for her role in The World of the Married (2020), the 27-year-old captured more hearts earlier this year in her Netflix romantic drama Nevertheless, which also starred the hunky Song Kang.

For those who can't get enough of So-hee, here's some good news for you — her new drama My Name will premiere on Netflix on Oct 15. But anyone who watches the trailer is in for a huge surprise.

In the new action noir series, So-hee is no longer the feminine and fashionable girl we got used to in her earlier dramas. Instead, she's a total badass.

My Name is centred around Ji-woo — played by So-hee — who becomes consumed with revenge after witnessing her father murdered right in front of her when she was only 17.

She then approaches her father's long-time friend Mu-jin (Park Hee-soon), who is the boss of Dongcheon — the country's largest domestic drug ring — for help. Under him, she infiltrates the police force as Oh Hye-jin in a bid to find her father's killer.

Fans can look forward to seeing a new side of Seo-hee, who told regional media in a virtual press conference today (Oct 5) that she wanted to take on the challenge of portraying Ji-woo.

Read Also
Who is Han So-hee? 5 things to know about The World of the Married actress who is now in Netflix’s Nevertheless 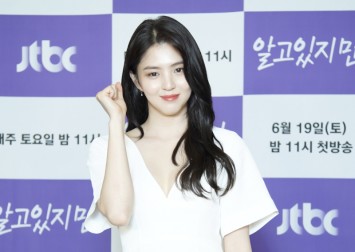 "[Ji-woo's] desperation and determination was something I could really feel off the pages of the script. [Portraying the character] involved the use of the physical body through the action sequences. That was a new challenge for me," she said.

In order to prepare herself for this role, she trained at an action school for three months prior to the shoot, gaining 10kg of muscles (and a bit of fats, she added) in the process.

"Since I worked out a lot, I ate what I wanted. So that's how I gained 10 kilos," she explained.

She learnt how to do action sequences with weapons and not injure her co-stars and her trainers in the course of it.

So-hee elaborated: "At first I thought that I would be able to pull it off easily, so I went to action school and attended one day of class. Then I [realised] once you try to fake it, you will end up not succeeding in it. It requires a lot of time and it's not just me doing it alone, I have to do choreography with my partner.

"It was a lot of pressure, and I was also worried about hurting [others], so I had to be careful all the time, that was quite challenging."

In the process, she found herself most comfortable using the baton.

"[It's] actually the softest weapon, as it's made of rubber. I had the least amount of pressure hitting someone with the baton because of that."

So-hee added she feels physically stronger from all that training, and has taken up kickboxing.

She isn't the only one who underwent a big image transformation in their careers. Here are other stars who did the same.

Anh Bo-hyun: From geek to sleek

Ahn Bo-hyun, 33, plays Jeon Pil-do, the ace of the police drug investigation unit, in My Name. He's swapped out his dorky look in the drama Yumi's Cells (currently showing on iQiyi) for a sharp and suave image.

In the years after the hit drama, Si-young went on to become an amateur boxer, clinching several titles in the 48kg-weight class.

Despite her stint in the combat sport, her role as a former firefighter in Sweet Home (2020) was still a surprise to fans as she showed off her very muscular physique. She learnt her action stunts six months before filming started, and her fitness regime included push-ups, pull-ups, tyre workouts, and rope activities.

With all the Squid Game mania going on right now, who can forget Lee Jung-jae, 48, also known as Player 456?

In the viral Netflix series, Jung-jae plays Gi-hun, a deadbeat father who is heavily in debt. When he's not dressed in the famous green-and-white tracksuit for the games, Gi-hun has a rather dirty and unkempt appearance, sporting a shaggy mop with a khaki jacket.

Don't be fooled by his appearance in the show, though, Jun-jae is actually quite the hunk. In the 1990s and early 2000s, he was the heartthrob in several Korean films such as An Affair (1998), and City of the Rising Sun (1999). He also had a rather iconic shirtless scene in the movie Typhoon (2005).

ALSO READ: People are sending 456 won to the Squid Game bank account, and other interesting things to know about the cast