'I just froze': Sharon Au shares details of burglary with Jamie Chua, intends to stay in Paris for now

Jamie Chua speaks with Sharon Au, who sheds light on the burglary incident in May this year that has left her traumatised.

Sharon Au has mostly kept mum about the details of the burglary in May, but the former actress and TV host finally opened up about the traumatic incident.

Speaking with socialite Jamie Chua over drinks in a YouTube video uploaded last Friday (June 17), Sharon said: "Today is exactly four weeks after the burglary. So actually just now when I left home, I was very jittery."

The 46-year-old explained that she felt the need to protect herself and that she was "very traumatised already". Sharon also said that she was touched by Jamie wanting to meet her the day she landed and expressed her heartfelt thanks to her.

Describing the scene, Sharon said: "When I came home and saw my door broken and saw the crime scene, I just froze.

"It was my friends who were with me that did everything. I just remember carrying Rudon and just thanking God that he wasn't hurt or wasn't taken or he didn't run away."

She then explained more of what she knew of the incident — there were two robbers that invaded her home, dressed as deliverymen.

"My neighbours were not home. They left on a holiday because that was a long weekend... so most Parisians left," the former Mediacorp actress said. "That is also the period of time where a lot of robbers strike."

Hearing this, Jamie broadly commented that Singaporeans take security for granted because our country is much safer compared to other countries. She even shared an anecdote about how she witnessed a piece of luggage being stolen at Charles de Gaulle airport "many, many years ago". 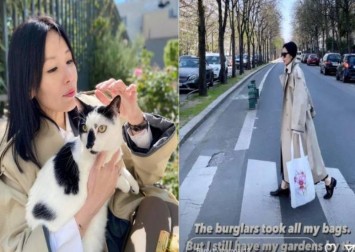 "Which is why I keep telling you that you should move back to Singapore," Jamie said to Sharon's amusement.

But Sharon insists on staying because she wants to confront the trauma.

"I don't want to do it now because then I would be running away from this trauma," Sharon explained. "I feel like I should have closure here."

She added: "We always think that it will not happen to me. So when something bad happens to you, your sense of loss is real, so never let your guard down."

Sharon clarified that it's still good to "live fearlessly", but advised viewers to do the basic amount of legwork to ensure their own safety.

Back when the burglary occurred, Sharon uploaded a post on Instagram, revealing that she had been robbed of almost everything in her home, save for her pet cat, Rudon.

"I have nothing now," the actress had written on her post.

The police were not able to provide much help either when a tracking application on her laptop indicated the laptop's location some 64km outside of Paris - officers did not follow up.

Thankfully, things have been looking up recently as a global network of Singaporeans began offering Sharon with food, home appliances and shelter to help pad her way to recovery.