'No one opened the door when Jeffrey knocked': Felicia Chin shares video of wedding 'gate-crash'

Jeffrey Xu was briefly locked out of Felicia Chin's room but it wasn't because of a gate-crashing game.

Felicia Chin and her bridesmaids didn't let him into the room, but it wasn't because his ang bao wasn't big enough.

In an Instagram post today (Oct 27), the newlywed shared a video of her wedding "gate-crash", where her groom Jeffrey Xu, 34, was left waiting outside the hotel room presumably because no one heard his knocks.

"There was no traditional gate-crashing in the morning but nonetheless we laughed so much!" Felicia, 38, wrote on her Instagram post.

"Swipe left for the video of the groom picking up the bride. No one opened the door for Jeffrey when he arrived to pick me up. Sorry noobs at weddings."

In the video, Felicia and her bridesmaids are having fun in the room while chatting about lattes and Milo.

Laughter erupts in the room as a woman, presumably one of the bridesmaids, rushes over and opens the door to let Jeffrey in.

Felicia added in a separate Instagram Story post: "No one opened the door when Jeffrey Xu knocked!"

Traditionally, Chinese weddings involve gate-crashing where the bride and bridesmaids plan a series of trials for the groom to go through as proof of his love, and these can include obstacle courses or games that range from the uncomfortable to downright embarrassing. 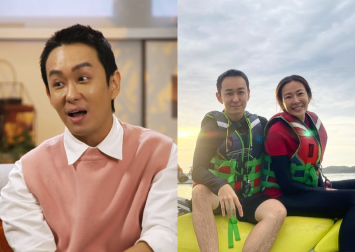 One of the simpler gate-crashing games would be to prevent the groom from seeing his bride until he forks over an appropriately-sized wedding ang bao.

Ironically, both Jeffrey and Felicia have said that they want to forgo gate-crashing events, but Jeffrey still found himself at the short end of a brief, unplanned and accidental gate-crashing trial.

In the video, Jeffrey, appearing unfazed by the delay, addressed Felicia by her nickname "Bugudu" before slowly and dramatically walking over to her with flowers in hand.

"I'm about to cry!" Felicia shouted.

As Jeffrey took hold of her hand, Felicia couldn't help but to comment between laughter: "Your hair! You used an entire can of hairspray!"

Another bridesmaid jokingly chided Felicia: "Is that what you're supposed to say?"

Felicia and Jeffrey married on Oct 22 in a Christian wedding broadcasted to the public via YouTube.

They had chosen to livestream the momentous occasion as Jeffrey's parents were unable to attend due to Covid-19 restrictions in Shanghai.