A new twist has appeared in the scandalous real-life drama that is Taiwanese singer-songwriter R.chord Hsieh's personal life.

On Dec 5 last year, his wife Keanna Taiyh reported him to the police for illegal drug use.

A week later, he told the media that he will be divorcing his pregnant wife after the Lunar New Year. He also admitted to dating live streamer Liya.

According to Keanna's friend who went on record, Keanna could not handle the stress after R.chord announced his affair, and had been feeling "tortured physically and mentally every day".

Despite giving herself three injections a day to try to protect her pregnancy, she eventually suffered a miscarriage. The friend added that Keanna blames herself for it.

This is her second miscarriage in her three-year marriage to R.chord; the first happened in April 2018.

When Taiwanese media approached him for comments, he said: "Hope she learns to be independent, take care of herself and her health, and I wish her happiness."

This revelation comes after days of vicious mud-slinging between Keanna, R.chord, and Liya. 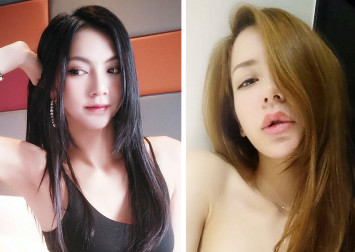 Keanna criticised Liya on Tuesday (Jan 7) in a lengthy Instagram post — her first public comment on the scandal — calling her a scheming woman who offered sex to gain fame in showbiz.

Liya retaliated, painting a different picture of Keanna to the Taiwanese media. She said contrary to media reports, Keanna was actually laughing — and not crying — when the police arrested R.chord for drug abuse, and that she also told the police to handcuff the singer.

"R.chord said it was alright, because Keanna had been threatening him every day. He knew that day would come, so he carried NT$50,000 ($2,250) cash with him every day in case he needed it for bail. He didn't want to reveal all these for her sake," Liya added.

She blamed Keanna for the marriage breakdown, saying "I'm just the exit where R.chord could climb out of the grave."

R.chord, on the other hand, uploaded a video to YouTube saying he has packed all of Keanna's belongings into boxes, and never wanted to see her again. The tattoo he had on his calf of Keanna's face has now been replaced with a stylised skull, and the tattoo of her name has also been painted over.

He told reporters: "I couldn't relax or rest when I was with her... It's my fault for wanting 'face' marrying a fake Caucasian girl. Not every wife is like Hannah Quinlivan (Jay Chou's wife)."

Yesterday (Jan 9), Keanna wrote an angry post on Instagram: "(R.chord) spends more than NT$10,000 on cannabis every month. His appetite for the drug gets bigger and bigger, and he gets more and more impatient, until the whole house is filled with the smell of cannabis.

"He even tried to get me, who was pregnant, to smoke it!"