Hong Kong actor couple Tavia Yeung and Him Law have finally revealed the gender of their baby!

In a series of maternity photos uploaded onto her Instagram yesterday (March 30), Tavia expressed excitement about her pregnancy and how she couldn't wait to hold hands with her "little princess"

That's right, the couple is expecting a baby girl!

The 40-year-old's ecstasy and excitement is clearly evident in her caption: "One body, two heartbeats. We've yet to meet but I already feel a deep connection with you.

"In a woman's life, this may be the only journey where we can truly experience as one, through happiness and sadness, through eating and sleeping. I'm grateful I can experience this magical journey."

In his own post, Him recounts the day he found out he would be a father. The 35-year-old didn't believed it then, pacing back and forth in their home before asking if she has had a medical check-up.

He also cheekily included the hashtag 'I'm a handsome father'.

Tavia announced her pregnancy earlier last month with an adorable photo of her and her husband, both using their hands to form heart shapes near their bellies.

"Our fate began from a TV serial. From colleagues to friends, from friends to lovers, and from lovers to spouses. And from now, we will have a new identity...there will be a little light bulb between us," she wrote. 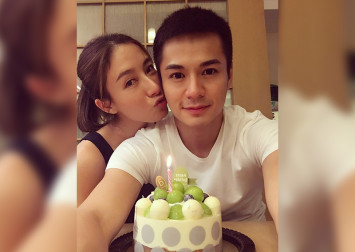 Previously, the couple was hit with a rumour in August last year that Tavia already had a bun in the oven. The rumour shocked even the pair themselves, but they quickly dispelled it.

Tavia's pregnancy is currently seven months in and their darling girl is due in May.

The two married in 2016 after they filmed their medical drama The Hippocratic Crush. Since then, the couple has always been open about their plans to have a baby, with Tavia reportedly "trying all methods" to get pregnant.