'I was worried I wouldn't have a girlfriend or a business': Ex-SIA steward says setting up lok lok stall with his girlfriend actually brought them closer together

With the number of lok lok stalls and JB-inspired establishments popping up across our little red dot, it's evident that we all sorely miss our closest neighbour.

Joining the slew of new eateries is StickTogether Lok Lok, which opened in December last year. But don't be hasty to lump them together with all the other lok lok stalls in the market — their rendition of the popular Malaysian street snack includes unconventional flavours such as bacon rock melon and crispy abalone with ebiko.

The stall is located in a nondescript coffeeshop at Marine Parade Central but it was hard to miss their whimsical store sign featuring a hedgehog covered in lok lok sticks when we visited them on a Thursday evening.

Surprisingly, the decision to set up the store was an impulsive one, founders Sam Leung, 42, and Pearlyn Tan, 28, both former Singapore Airlines cabin crew, shared with AsiaOne.

'When you don't have experience, you don't know what fear is'

When I asked Sam why they chose their current location at Marine Parade, I was expecting him to list out the pros of the area such as footfall or its proximity to their home.

But the real reason was none of the above.

"We were naive and stupid. The idea of our stall being five minutes away from the beach was just very romantic. I've actually never been to the beach since we opened," he said sheepishly. "We just wanted to make really good lok lok. We didn't think through this enough," 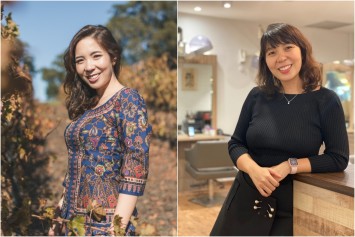 It's easy to assume that the pair, who both do not have any prior F&B experience, felt a little out of depth after delving head first into the scene but they chose to look at the situation from a different perspective.

So, what was the motivation behind taking such a huge risk?

After realising that the lok lok here "all tasted the same", Sam and Pearlyn decided to get creative, coming up with skewers inspired by their overseas travels.

"We just thought it would be exciting to be able to go to a lok lok stall and get a stick of something that's Japanese, Indonesian, or Thai — a variety of cultures," Sam told me with a shrug. "Why should there be any limitations? It's just food on a stick."

Setting themselves apart from their competition

As with every business, StickTogether has had their fair share of bumps along the road.

Marketing their brainchild proved to be one of their issues.

"We don't have that kind of budget to advertise ourselves on big platforms and I don't have money to hire 'chiobus' to promote our shop," Sam told me with a cheeky laugh.

While their business isn't booming for now — especially since the location isn't the most central — the couple still remain positive about their situation and are taking it one step at a time.

Sam and Pearlyn are hoping that their stall will get more popular after the nearby church reopens but if business still does not pick up, they plan to eventually move out of the coffeeshop to somewhere more central.

Read Also
Before the nasi lemak burger was cool, this former SIA steward already turned it into tea 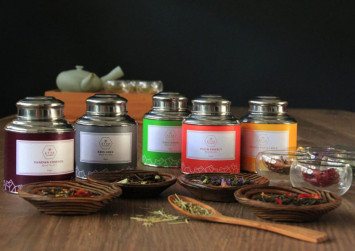 However, the couple are banking on their unconventional lok lok that diners will find hard to forget.

"These other stalls just serve whatever you can find in Malaysia to recapture the whole JB vibe. We don't want to do that because in the long run, what do we do when JB reopens?"

But that proved to be challenging as well, and the duo spent a fair bit of time perfecting their skewers and sauces.

They also "wasted a lot of money" trying out different recipes and trying to create the perfect sauce, says Sam.

"We even had a spreadsheet!" He exclaimed as he described how he and Pearlyn would carefully jot down the exact proportions of each ingredient in their sauces so they could keep track of their progress.

Sticking together through thick and thin

Another thing setting them apart is their adorable name.

"I wanted our stall name to be a symbol of hope, just like how superheroes have an insignia. It had to be something cute that would make people smile as well as be a message to encourage people to stick together during the hard times," Sam said with a chuckle.

This applies to the pair's own relationship as well. Running a business by itself is already no easy feat and doing so with your partner could potentially make things even harder.

Despite that, the couple, who have been together for five years, say they have been riding out the bumps in the road as a team.

"I was so worried that we would have conflict and I would end up not having a girlfriend or a business after everything," Sam said candidly. "We do disagree, of course. But at the end of the day, we need to separate being partners and colleagues."

While issues do arise every once in a while, Sam chooses to view these in a positive light instead of letting them drive him and Pearlyn apart.

"Sometimes, the same annoying things that make you both fight outside of work are magnified in the working environment. But if you can eventually overcome that, you can grow and we did get closer."

But there are also some pros to running a business with your partner, according to Sam.

"Sometimes, I don't even need to tell her what I need because she already knows and has already prepared it for me or is willing to help me out. She knows all my shortcomings."

During our chat, Pearlyn had prepared some lok lok for me to sample and you bet I was blown away by each and every one of them.

First up, I had the crispy abalone with ebiko ($3.50), which also happens to be Sam's favourite lok lok due to how innovative it is. This features a plump abalone wrapped in beancurd skin and deep fried for no more than 20 seconds to retain its juiciness of the abalone.

While it is the priciest thing on their menu, trust me when I say that it is worth the extra money because you definitely can't find something like this anywhere else. It's also a seasonal item that's only available for a limited period of time so get it while you still can!

Another curious menu item is the bacon and rock melon ($2). If you enjoy the savoury-sweet combination of pineapple on pizza, this will definitely be up your alley.

The skewer features sweet Chinese rock melon and bacon strips which Sam says reminds him of a parma ham and rock melon salad.

"Of course, I can't afford to fry parma ham so this has to be the alternative," he laughed.

One of my personal favourites was the wanton quail egg ($2).

According to Sam, this is one of the harder skewers to put together — he has to wrap each slippery quail egg in a wanton skin before stabbing it with a stick.

However, the effort pays off. Once you bite into the crispy wanton skin, it breaks open to reveal the creamy quail egg and I absolutely love the contrast of textures between the two.

One new menu item that I also really enjoyed was the shishamo ($1.50). Sam came up with a special seasoning that helps to mask its fishiness, generously spread over the entire fish so each piece is nice and evenly coated.

Of course, you have to try these sticks with the myriad of sauces that they have — especially the mayo-based ones such as the Laoganmayo, Tom Yumayo and Wasabee.

While these sound terrifyingly spicy, Sam and Pearlyn assured that they try to make it more palatable for the masses with just the right amount of mayonnaise so that even kids can enjoy the sauces.

And this isn't all the duo has got up their sleeve — in the future, they even plan to create a Calpis popsicle as a refreshing dessert after you've binged all their fried food.

"I hope to come up with something new every two months to keep it dynamic because I don't want a situation where when JB opens up and I lose my business. I would like to think that what we have is unique to Singapore," he says with a grin.