Yip Pin Xiu makes a splash at the Tokyo 2020 Paralympics

Yes, the 29-year-old who came in first in the 100m backstroke S2 in 2:16:61 last week, has picked up her second Gold medal at this year's Paralympics (and the fifth Paralympics Gold medal in her career) - this time, in the Women’s 50m Backstroke S2 final.

Pin Xiu finished first out of eight with a time of 1:02.04, setting a new Season Best record and successfully defending her Gold medal from Rio 2016.

This effectively cements her spot as the reigning World Record holder for both events. Power sia!

"This year is a bit different in the sense that it is a five-year cycle, and the past two years have been so uncertain.

"To me, it feels very special because we've learnt to adapt in the face of uncertainty and I think with the (whole of) Singapore cheering me on, it's been really amazing," says Pin Xiu.

"I do want to go to Paris and we'll see how the next three years turn out. It's exciting, three years is very short, we have to dive straight into it. After all the hard work, after a very tiring cycle, I am still very excited about it."

The best part: Pin Xiu gave us all the opportunity to hear "Majulah Singapura" played during the victory ceremony!

"We were joking that we’re going to run around the corridor and scream our lungs out, but, really, we'll just hang out with whoever's left in Tokyo!" says Pin Xiu, adding that she is extremely grateful to the Singapore National Paraympic Council, Sport Singapore and everyone who sent supporters to cheer Team SG on in Tokyo. 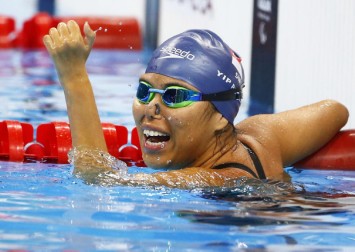 "I will be celebrating with them, and, of course, the swim team as well."

And what's a celebration for a Singaporean (athlete or not) without yummy food?

The moment she touches down in Singapore, Pin Xiu says she will zoom in on something definitely local, "like chicken rice! The other day I heard somebody say mee siam - so mmm...!"

Enjoy the taste of victory - and, of course, your well-deserved meal, Pin Xiu!

In case you missed it, our para-athletes all flew the Singapore flag high at the Tokyo 2020 Paralympic Games. Read on and be wowed:

Singapore’s first world champion in archery didn't make it past the 1/8 elimination round of the Women's Individual Compound Open, but she is taking the positives from this experience and aims to come back even stronger.

Team Singapore's flag-bearer at the opening ceremony of the Tokyo 2020 Paralympic Games clocked a distance of 9.92m in the shot put event, finishing eigth out of nine, and setting a new Personal Best (PB) - twice! - and National Record (NR).

Our cycling duo set two new Personal Best records in the Men’s B 4000m Individual Pursuit Qualifying and the Men’s B 1000m Time Trial Finals, power-pedalling themselves into the Top 10 in both events.

ALSO READ: Gold medal No. 4 in the bag: No pandemic can stop Pin Xiu

The Bronze medallist at the 11th Fazza Dubai Para Powerlifting World Cup earlier this year finished in sixth place out of nine competitors in the Women's Powerlifting 45kg finals, a strong finish in her debut at this level.

Together with Gambler, she scored 62.750 points – 7.679 points away from eighth spot. Also amazing was the fact that she scored higher than the 62 points she achieved in Rio 2016, after her usual partner Cassius Royal suffered an injury.

Her outstanding achievements at the games - one Silver and three Bronze medals, meant she was selected as one of six Paralympic Flag bearers at the opening ceremony.

With her steed Banestro, the Paralympics medallist qualified for the Dressage Individual Freestyle Test Grade I finals event where she finished fifth with a score of 75.060 percentage points – six points behind the Bronze medal winner.

His long-time partner Don’s Day Dream came out of retirement for Tokyo 2020, and together they finished with an overall score of 61.588 in the Equestrian Dressage Individual Championship Test Grade II event, missing out on the top eight spot by just 5.236 points.

Another debutant like Wei Soong, Sophie finished fourth out of seven in the Women’s 100m Breaststroke Sb12 Finals at her very first Paralympic Games, a mighty achievement.

She’s looking to set new personal bests especially for next year's Asian Para Games in Hangzhou and the world championships.

In the Men’s 50m Freestyle S7 Finals, Wei Soong finished seventh out of eight and set a new National record, smashing the 29-second barrier at this Paralympic Games.

All this considering he’s making his debut at the Paralympic Games. Ups lah, bro.

ALSO READ: Diroy Noordin's timeline of triumph at the Paralympics: Hurling himself forward and further