Miss Universe Malaysia 2017 winner Samantha Katie James caused quite a stir with her controversial remarks about race. Now, Malaysians are rallying to strip her of her crown.

James, 25, had made several posts on her Instagram stories on June 1, writing that "black people" should "relax". She had also asserted that they "chose to be born" as a "coloured person" in America.

Her remarks came amid widespread Black Lives Matter protests in the United States after the death of George Floyd.

Shortly after James' posts, Miss Universe Malaysia Organisation (Mumo) issued a statement to condemn her remarks as "inappropriate, offensive, unacceptable and hurtful". Mumo also declared that James has not represented the organisation since June 2018.

Meanwhile, netizens Marcus Gan and Yee Heng Zeh were so enraged by James' remarks that they started a change.org petition to strip her of her Miss Universe Malaysia title.

"She is a public figure with over 160k followers on Instagram. She misused her platform and social media presence to voice out her blatantly racist and ignorant remarks.

"Her ignorance and lack of self and privilege awareness do not reflect the Miss Universe Malaysia title and with this petition, we hope she will be stripped of her title. For someone who is so blatantly ignorant should not represent Malaysia in any capacity."

Calling Mumo's response "unsatisfactory", the duo said: "If they strongly condemned all acts of racism and prejudice, they would've stripped her of her crown and title." 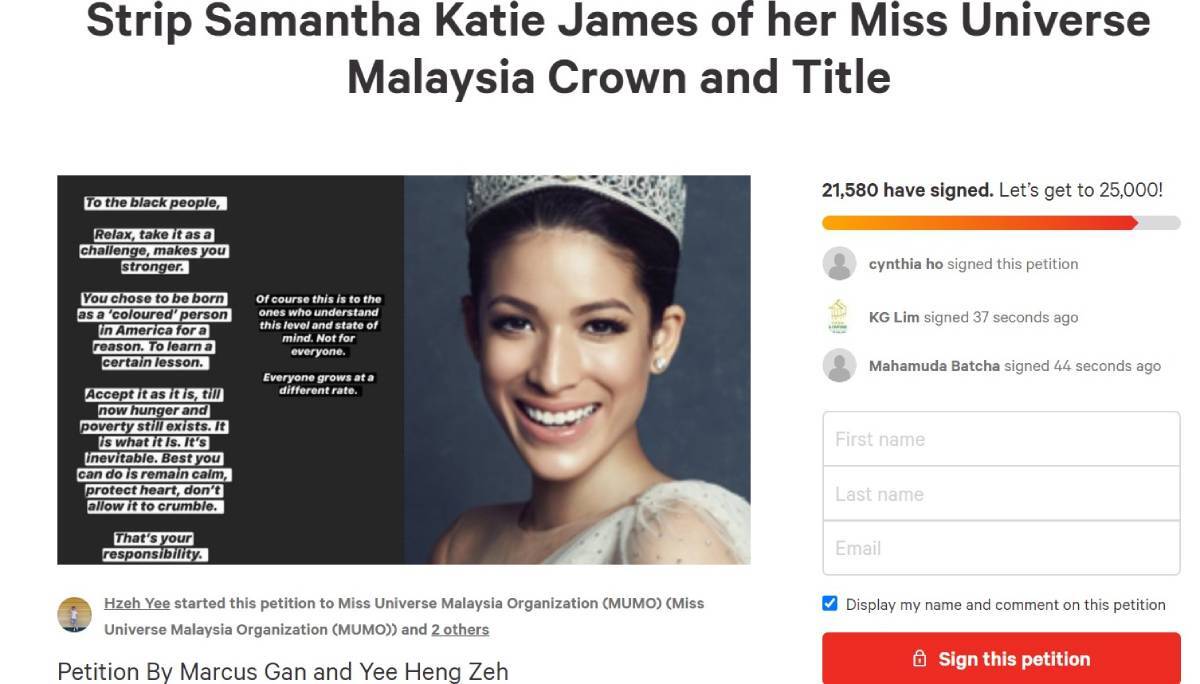 Malaysian makeup company Velvet Vanity was swift to denounce James' views and clarify that they would no longer be affiliated with her.

James had previously featured products from the brand in her Instagram posts.

The brand issued the following statement on Instagram: "Since the beginning of our journey, we are dedicated to cater to everyone albeit their skin colour so for us to support her wrongdoings would be contradictory to our brand name.''

In the light of the recent event of racist sentiments that has been brought by Ms Samantha Kathy, the whole team of Velvet Vanity would like to clarify that we don't endorse this kind of discriminatory behaviour. As a brand, since the beginning of our journey we are very dedicated to cater to everyone albeit their skin colours so for us to support her wrongdoings would be contradictory with our brand name. The post was made way before this case and we are not affiliated with her anymore. As a brand, we support #blacklivesmatter and we would never associate ourselves with racists in any way.

Netizens and Malaysian celebrities have also expressed their disgust

Netizens reacted to the beauty queen's statements with scorn, disappointment and condemnation. The hashtag #SamanthaKayty was still trending 24 hours after James posted her tone-deaf and inflammatory remarks which went viral on social media.

The Malaysian Chinese-Brazilian model posted her Instagram replies to questions from netizens asking her to clarify what she meant by her remarks and tried to justify herself by saying that she had experienced discrimination herself as a "white girl in a local Malaysian school" - but that backfired instead with netizens calling out her ignorance on what real racism felt like. 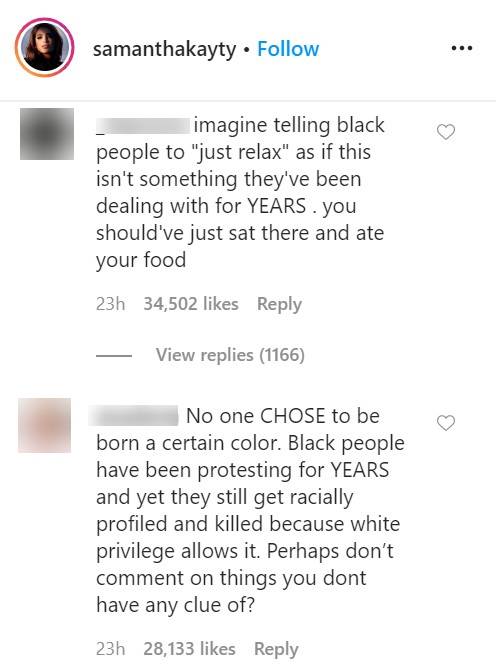 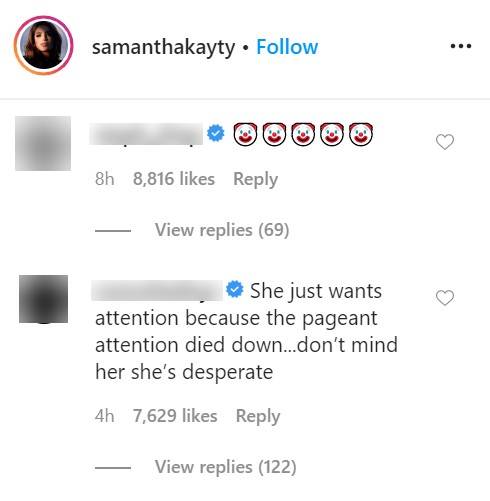 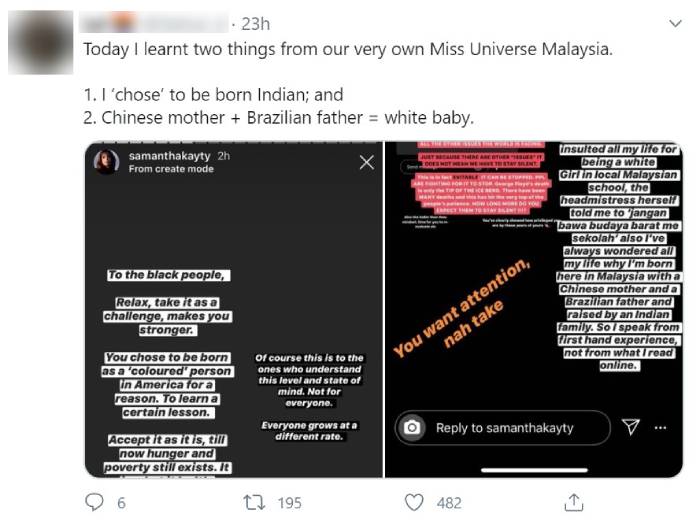 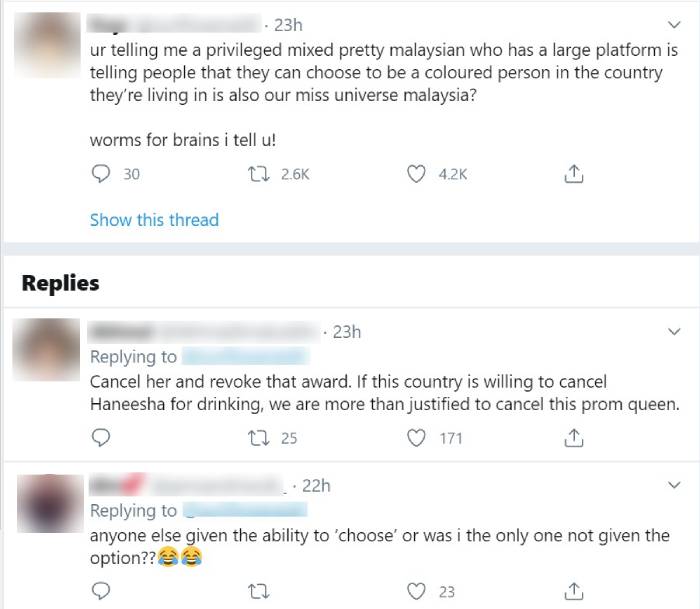 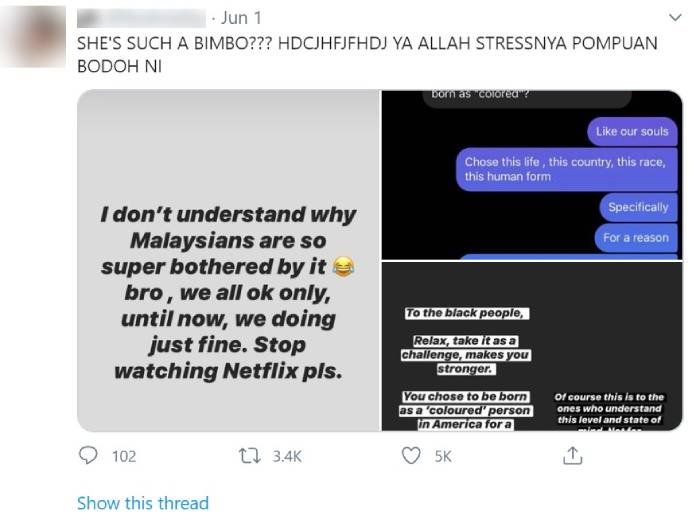 Not only did James feel the heat from netizens' wrath, other Malaysian celebrities also criticised her remarks — among them were Malaysian actor Henry Golding and YouTuber Jinny Boy. 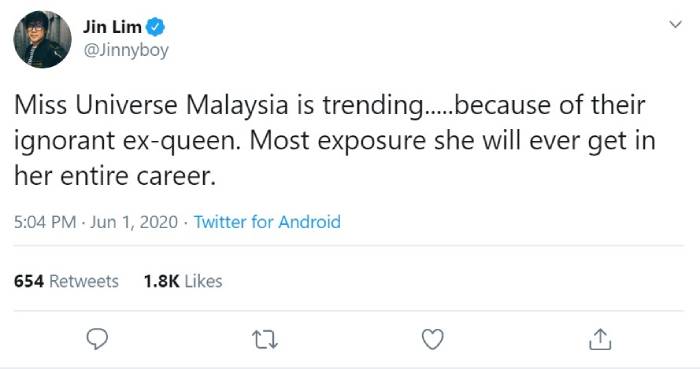 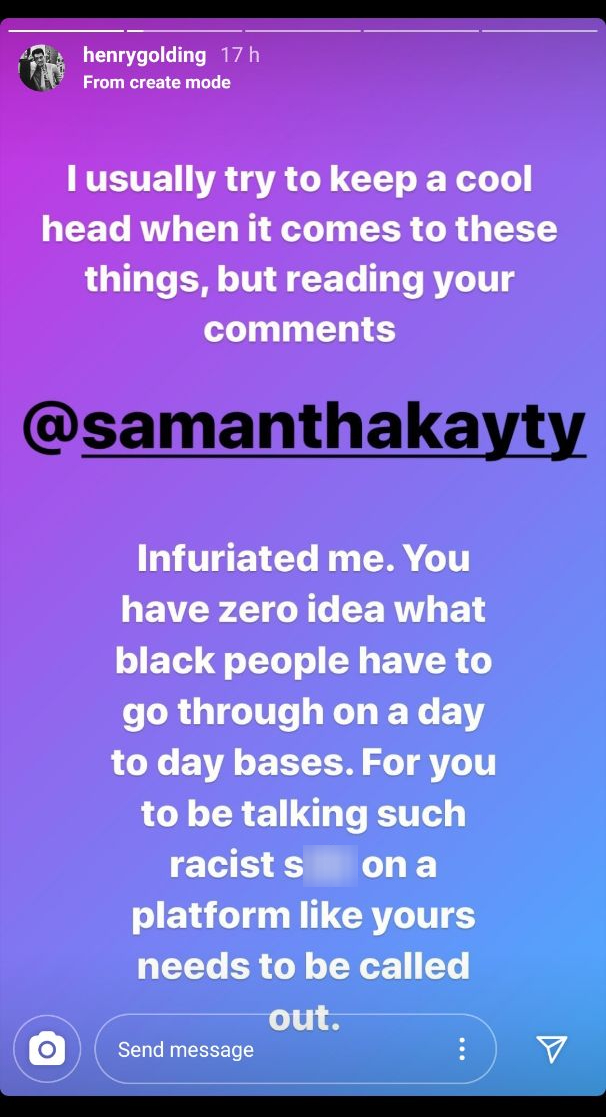 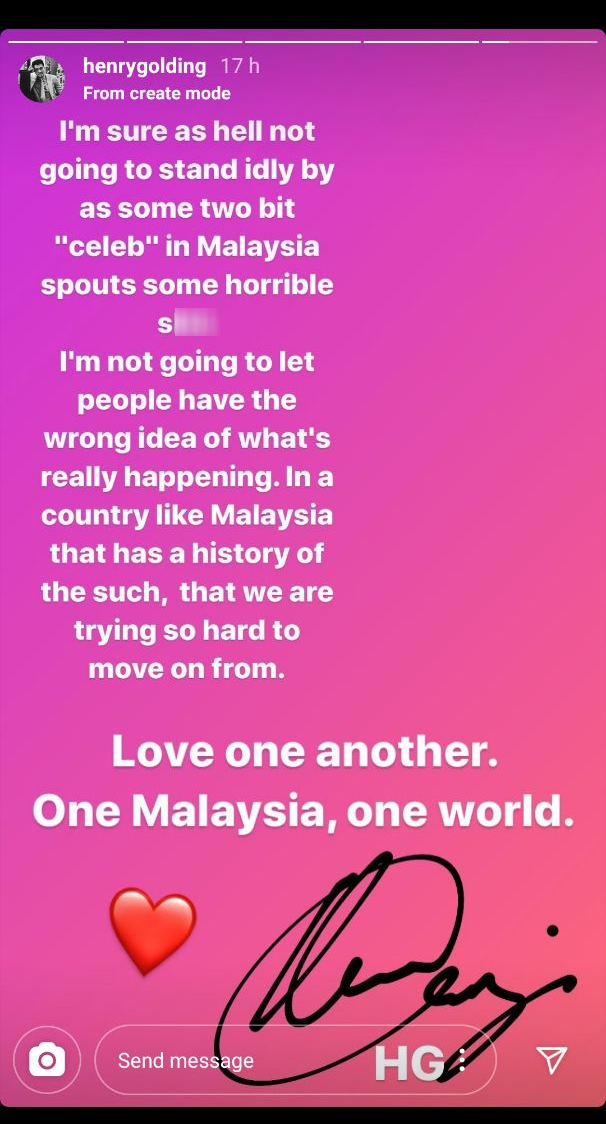 He said on his Instagram story: "You have zero idea what Black people have to go through on a day-to-day basis.

"It is hundreds of years of oppression and injustice kept in place by money and power from people such as yourself, ignorant and selfish people."