Imagine finding a parking spot after a long wait, only for someone else to snatch it away.

This was what happened to a couple in Malaysia who had an unfortunate encounter with a woman who 'choped' a free lot in a carpark by blocking their car.

Malaysian game streamer Nur Syafira took to Facebook on Sunday (Sept 4) to share her sister and brother-in-law's experience with the hogger.

In the first video, a woman could be seen pacing around a car that was about to exit a parking lot, effectively blocking Syafira's brother-in-law from driving forward.

"Which school did you learn to park from, sister?" he was heard asking as his wife zoomed the camera in on the woman. She then walked over to the couple's car, saying: "Brother, my uncle wants to park here".

As the pair voiced their disagreement, a Singapore-registered SUV swiftly drove into the free lot as the woman blocked the couple's way.

Despite their honking, the SUV took the parking spot.

"We waited a long time, he took the parking lot. Really stupid. How can he do that?" Syafira's sister asked.

Similarly infuriated by the incident, Syafira wrote in her Facebook post: "I have never uploaded something like this on my gaming page but this person has no manners. Uncivilised. It just happened to my sister. You can see for yourself and rate the level of your heartache.

"[The woman is] grinning like a rotten shell (without reason) there. Hope this goes viral."

Netizens took to the comments section to express their anger.

"As a Singaporean watching this, I don't understand why they had to do this. Doesn't matter which country, this is wrong and disrespectful," one netizen wrote in Malay.

Another netizen commented how this was the "standard for Singaporeans, causing difficulties when they leave their country." 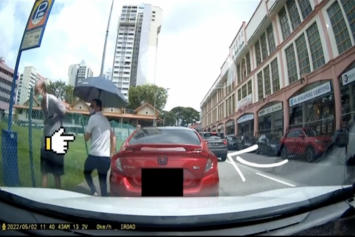 Syafira also explained that her sister did not start a fight with the woman as her kids were around and that it "was not good for young children to see [her arguing]".

Earlier in May, a Malaysian driver vandalised a Singaporean car over a parking lot dispute in Jalan Besar.

A video clip of the incident went viral on TikTok with over 100,000 views.