The advertisement claims to be written by "Straits Times" and promotes a "new secret investment" endorsed by Mr Lim which has "experts in awe".

The fake article also claims that Mr Lim was invited onto news programme Hello Singapore and spoke to host Lin Youyi on the investment opportunity.

A reader who wanted to be identified only as Ms Kho told ST that she saw the advertisement on online selling platform Carousell.

"When I saw the advertisement listing on Carousell with the photograph, I was not sure if it was real," the 40-year-old said. "It said 'Straits Times' and had a logo, which made it seem even more real." 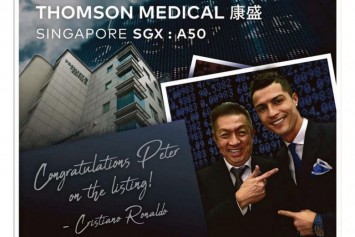 After asking a friend about it, she found out that Mr Lim had previously filed a police report over a similar advertisement.

However, she felt that those who were not aware of previous reports would fall for it and investment in the scheme that the advertisement was promoting.

"All the other logos put together on the site made it even more real," she added.

Logos on the site included those of The New Paper, The Business Times and Singapore Business Review.

In 2017, Mr Lim lodged two police reports after his name and images were used in online scams.

One of the scams involved several Facebook accounts that claimed to be the Salford City co-owner's official accounts.

Another involved a claim that Mr Lim endorsed investments in a cryptocurrency.

In 2016, the billionaire filed a police report against online claims that he had endorsed certain investment methods.

In his Facebook post notifying the public of these reports, he urged Singaporeans to exercise caution when reading information online to avoid falling victim to such scams.

These false endorsements are typically the work of crime gangs, bitcoin experts have previously said.