Mr Kenny Leck admitted to his personal failings before mid-2019 and apologised to those he had caused pain.

SINGAPORE - A flurry of statements has come from the local literary community distancing itself from independent bookstore BooksActually, after its owner Kenny Leck came under fire for his past relationships with young female employees.

In a viral article by digital news site Rice Media published last Saturday (Sept 25), former employees of Mr Leck - including his ex-wife Renee Ting - alleged he had made romantic advances towards young female staff. Mr Leck has denied the allegations.

A group of 38 authors published by Math Paper Press, BooksActually's publishing arm, released a statement on Monday saying they were "angry and disheartened" to read past employees' accounts and did not condone non-consensual or exploitative behaviour.

"We also acknowledge that our writing community should do better, and that scarce resources should never be an excuse for unacceptable behaviour," they added.

The authors welcomed the decision to transfer Mr Leck's ownership of the bookstore and publishing arm to his team of five employees.

"If BooksActually wishes to receive the support of our writing environment, we need them to fulfil their promises of outlining and enforcing better procedures and policies, including an anti-harassment policy.

"We hope that BooksActually emerges from this controversy and becomes a bookstore we can depend on and love."

Exactly how the transfer of ownership will transpire has yet to be established, though other publishers and literary groups have said they will suspend ties with BooksActually until they are satisfied Mr Leck is no longer in charge.

Charity Sing Lit Station, non-profit Singapore Unbound and movement #BuySingLit, which Mr Leck previously helmed as co-chair, have disavowed any future involvement with BooksActually until changes are made.

Sing Lit Station said in a statement on Sunday that it would no longer be working with BooksActually on its Jalan Besar writing residency and that it would reassess future collaborations based on "meaningful organisational changes that prioritise the safety and welfare of their staff".

It added that it was planning a series of discussions with stakeholders and members of the community to address the concerns and gaps in the industry.

Home-grown publisher Ethos Books said in a Facebook post on Monday that it will cease to retail books through BooksActually until the current staff have clearly indicated they have assumed full directorship and ownership and demonstrated that systems and protections are in place to protect staff welfare.

We would like to express our fullest support and solidarity with all of the women who have experienced exploitation,...

The Rice article interviewed several former BooksActually staff, most of them women who were in their 20s when they worked there. They described working long hours without designated breaks and being paid little and sometimes late.

Ms Ting, who was in a relationship with Mr Leck for six years, said she drew no salary while they were dating, lived in the store and had hardly any days off.

In a Facebook post on Sunday, Mr Leck admitted to his personal failings before mid-2019 and apologised to those he had caused pain. He said there were allegations and inferences that "remain totally untrue", though he did not address these in detail.

Over Sunday and Monday, numerous writers took to social media to express solidarity for the women who spoke up, as well as regret that they had not been more aware of what was happening at the bookstore. 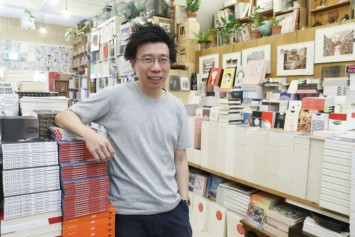 Some, like Alfian, have begun discussing making reparations to the former employees from their book earnings.

Singapore Literature Prize-winning poet Joshua Ip told The Straits Times he has taken no royalties for any of his Math Paper Press books. He refuses royalties from all publishers he has published with as a personal choice.

Ip said in a Facebook post on Monday that he has paused all future projects with BooksActually and will "await the conversations with the literary community and with the new team" before taking action on his work already in print.

Responding to media queries, a National Arts Council spokesman said: "NAC does not have any existing partnerships with BooksActually and Kenny Leck, nor are they involved in this year's edition of Singapore Writers Festival organised by Arts House Limited."

BooksActually last served as the festival's official bookstore in 2018.