SINGAPORE - A scheduled annual bilateral meeting between Singapore and Malaysia has been postponed following the intrusion by Johor Menteri Besar into Singapore territorial waters off Tuas, said Singapore's Ministry of Foreign Affairs (MFA) on Saturday (Jan 12).

The intrusion into Singapore's waters off Tuas by Datuk Osman Sapian on Wednesday has made the 14th meeting of the Joint Ministerial Committee for Iskandar Malaysia (JMCIM) scheduled for Jan 14 "untenable", said an MFA spokesman in response to media queries.

Malaysian newspaper The Star on Saturday cited sources as saying Malaysia's participation in JMCIM, which is supposed to be held next Monday in Singapore, is now in limbo and the meeting could be postponed. 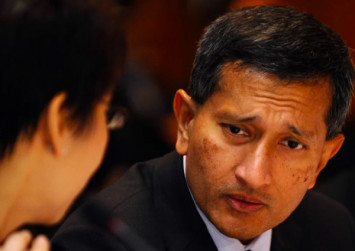 The committee was set up in 2007 to study how both neighbours can work together in the South Johor economic zone of Iskandar.

The Malaysian delegation at this year's meeting was supposed to have been led by Economic Affairs Minister Azmin Ali, Johor Mentri Besar Osman Sapian and other Johor state leaders.

According to an official source who could not be named due to the sensitivity of the matter, Mr Osman's presence on the vessel was not sanctioned by the federal government.

"He was told not to do it, yet he went ahead anyway," the source said.

The two neighbours have been embroiled in a dispute over maritime boundaries.

Kuala Lumpur had on Oct 25 last year unilaterally extended the port limits for Johor Baru port, such that they encroach on Singapore's territorial waters off Tuas. As a result, Malaysian government vessels had intruded into Singapore waters.

The new boundary line extends beyond what Malaysia had previously claimed as its own waters in a 1979 map, which Singapore has never accepted. Singapore on Dec 6 extended its own port limits in response, to cover the full extent of the Republic's territorial waters.

Mr Osman on Wednesday night took to social media to share photos of him visiting a Malaysian government vessel anchored in Singapore's territorial waters off Tuas.

His Facebook post came a day after foreign ministers from both countries met in Singapore and agreed to form a working group to study and discuss the dispute over maritime boundaries.

Responding to media queries on Thursday, the Maritime and Port Authority of Singapore (MPA) said there were five Malaysian government vessels in Singapore's waters as of 6pm on Wednesday.

The MPA also confirmed that two vessels remained in Singapore waters as of 6pm on Thursday.

Mr Osman has denied that he was in Singapore waters, saying in a Facebook post on Friday that he was visiting officers on duty to safeguard the boundary, and that the allegations were an attempt at obfuscation.