SINGAPORE - Nobel Prize winning anti-nuclear campaign group ICAN has offered to pay for the cost of the historic summit between North Korean leader Kim Jong Un and US President Donald Trump, including the hotel bill for the impoverished state's leader.

The offer comes after a media report that the cash-strapped North may have trouble bearing the cost of its leader's stay in Singapore and the large delegation of security and support staff for the meeting scheduled for June 12.

The International Campaign to Abolish Nuclear Weapons (ICAN), which won last year's Nobel Peace Prize, said it was willing to use its prize money to pay for any accommodation or meeting space needed to make the summit a success.

"The Nobel Peace Prize included a cash prize and we are offering funds from the prize to cover the costs for the summit, in order to support peace in the Korean Peninsula and a nuclear-weapon-free world," ICAN official Akira Kawasaki said.

"This is a historic meeting, and once in a generation opportunity" to help establish a world free of the threat of nuclear weapons," Kawasaki told Reuters by telephone from Tokyo. 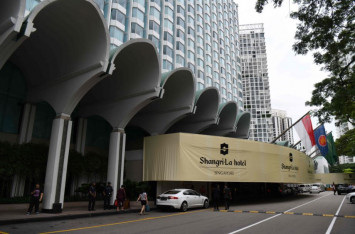 The intention to spend the prize money is in line with the work the group has done to lobby for the UN Treaty on the Prohibition of Nuclear Weapons, which was adopted by 122 nations but not any of the nuclear weapons states or North Korea.

"It's not about paying for luxury rooms for the leader of the DPRK or anyone, that's not our intention," Kawasaki said. DPRK is short for the Democratic People's Republic of Korea, the formal name of North Korea.

Kim Chang Son, the de facto chief of staff for the North Korean government, was seen at The Fullerton five-star hotel in Singapore last week during a visit to meet U.S officials to work out the logistics for the summit.

The Fullerton was North Korea's lodging of choice, the Washington Post has reported. The presidential suite may set the government back by at least $8,000 a night, it said.

Kim's trip to Singapore, which would be the furthest he will have travelled as leader, poses logistical challenges such as the likely use of Soviet-era aircraft to carry him and his limousine, as well as dozens of security and other staff.

Singapore, a small but wealthy Southeast Asian city-state, has said it would bear the cost of the summit to do its part to ensure a successful meeting.

The Nobel Prize award differs from year to year, and in 2017, the prestigious prize was set at 9 million Swedish crown ($1.02 million).