There are currently 26 Safe Sound Sleeping Places (S3Ps) across the island.

SINGAPORE - Around 270 people applied for a place in Safe Sound Sleeping Places (S3Ps) - safe shelters for the homeless and rough sleepers - last year.

There were also around 860 unique applicants for transitional shelters, said Parliamentary Secretary for Social and Family Development Eric Chua on Friday (Feb 18).

Mr Chua was replying to a parliamentary question by Mr Edward Chia (Holland-Bukit Timah GRC) about the number of applications for temporary shelters last year (2021) and successful placement rates.

About 61 per cent of those who applied for a spot in a S3P were successful, he added.

The remaining applicants were rejected as they had mental health, behavioural or addiction issues, or had care needs that require close supervision.

"The Ministry of Social and Family Development (MSF) would refer these clients to appropriate facilities and services for further support," said Mr Chua.

Of the transitional shelter applicants, who were either referred by MSF or other social service agencies, about 62 per cent were admitted.

Some of those who did not get a placement had care needs that the transitional shelters were unable to support, such as applicants who required assistance with daily living activities. 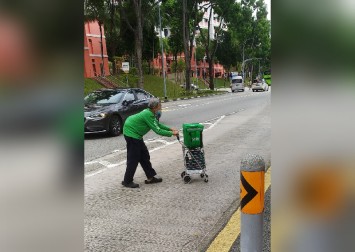 These people were referred to other options, such as senior group homes which provide assisted living in public rental flats, said Mr Chua.

He said other applicants rejected the offer to move to a transitional shelter as they did not want to co-share space with others, follow shelter rules, or work with a social worker, or preferred to remain at familiar locations.

Mr Chua added that there are no waiting lists for both types of shelters, as there is sufficient space.

Most S3P applicants got in within three working days, while nearly 80 per cent of individuals  who got a spot in a transitional shelter moved in within a week.

There are currently 26 3SPs across the island, which are run by organisations that are part of the Partners Engaging and Empowering Rough Sleepers (Peers) network.

The network was set up in July 2019 to bring together the MSF, other government agencies and community partners, in order to help the homeless here.

Transitional shelters not only provide temporary shelter but also on-site social work intervention, where social workers work with residents on their issues and support them in securing long-term stable housing.

There are six of them, which are funded by the MSF, and provide a total of around 500 spaces for individuals and around 180 spaces for families.

Drawing from his participation in past night walks conducted by organisations to meet the homeless and rough sleepers, Mr Chua said each rough sleeper's life situation is unique.

"When we construe rough sleeping or homelessness as purely a single-dimensional problem of housing - I think that's where we need the public mindset to slightly shift," he added.

Replying to a question by Mr Seah Kian Peng (Marine Parade GRC), Mr Chua said a small proportion of rough sleepers have homes to return to, but choose to sleep elsewhere for various reasons.

These include avoiding disputes at home, wanting to spend time with their friends or sleep closer to their workplaces.

Mr Chua noted that more rough sleepers who were previously reluctant to work with organisations and social workers to find stable long-term housing, have become receptive to such help in the past two years.

"Our assessment is that, in the past two years because of the pandemic, we have actually managed to match more rough sleepers to either short-term or long-term housing," he added.

Members of the public who see anyone in need of shelter can contact MSF's Peers office at msf_peersoffice@msf.gov.sg or call the ComCare hotline at 1800-222-0000.