"Sorry boss, I'll be late for work because there's a python outside my door."

It may sound like an incredulous excuse, but that's exactly what happened to one Bedok Reservoir resident who woke up to an unwelcome visitor at his doorstep early on Thursday (June 2).

The slithery surprise came in the form of a reticulated python, estimated to be about 2.5 metres long.

Based on photos and videos online, the reptile had stretched itself out comfortably across the window and doorway of the ground-floor HDB unit.

According to Shin Min Daily News, the python was spotted at Blk 126 Bedok Reservoir Road at 6.30am and the police subsequently arrived to cordon off the area.

A nearby resident who spoke to Shin Min Daily News told the paper that he saw the snake outside the unit on his way to buy breakfast. The 70-year-old retiree added that cleaners had reported the incident to the town council, who then informed the police.

When interviewed, the 34-year-old resident of the unit told Shin Min Daily News that he got a shock when he was greeted by several men in blue when he opened the door to head to work.

The tenant, identified as Peng Wenhao by the Chinese evening daily, shared: "They said there was a snake at my door and told me not to go out."

The police also suggested that Peng keep his windows and door closed to prevent the snake from climbing into the flat.

It was probably a good call, as a video posted on the SG Chinese Community Facebook page showed the snake slithering about outside the window, seemingly looking for a way in.

A man in the background speaking in Malay could be heard exclaiming, "Is this someone's [snake] or what?"

As a rescue team from the Animal Concerns Research and Education Society (Acres) arrived only at around 9am to capture the reptile, Peng, who works in a Chinese medical hall, had to inform his boss that he would be late.

According to Shin Min Daily News, Kalai Vanan Balakrishnan, co-chief executive of Acres, explained that due to peak hour traffic, rescue personnel were not able to get to the location sooner.

Read Also
Man rescues snake in Singapore condo, only to get bitten by it 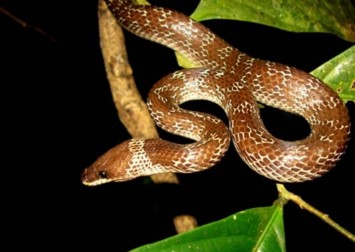 Kalai expressed gratitude to the police and the town council for monitoring the situation and ensuring that members of the public maintained a safe distance away from the reptile.

Kalai added that reticulated pythons are shy creatures by nature, and that the one captured outside the unit could have come out from nearby drains or canals.

The python may have climbed onto the stairway of the HDB flat after realising that it had been spotted, said Kalai, explaining that doing so provides the creature with a sense of safety.

He advised members of the public to dial Acres' 24-hour hotline at 97837782 if they come across any animals in distress.