Birthday surprise gone wrong: Man gets 15 months' probation for sneaking into friend's hotel room while she was under SHN

Sow Kaiser had earlier pleaded guilty to one count of abetting the friend to breach SHN requirements.

SINGAPORE - A 20-year-old man who visited a friend in a hotel room where she was under a stay-home notice (SHN) was on Wednesday (Sept 8) sentenced to probation for one year and three months.

As part of his probation, Sow Kaiser will have to serve 80 hours of community service and remain indoors between 10pm and 6am.

His parents have executed a bond of $5,000 to ensure his good behaviour during the probation period.

Sow had earlier pleaded guilty to one count of abetting the friend, Ms Teo Yue Qi, to breach SHN requirements.

Another charge, of criminal trespass, was taken into consideration by District Judge Tan Jen Tse during sentencing.

Court documents state that Sow and Ms Teo, 20, knew each other from their school days.

Ms Teo entered Singapore on Nov 22 last year and was placed on SHN till Dec 6, as part of Covid-19 restrictions. Court documents did not state where she had arrived from.

She was supposed to remain alone in her room at The Ritz-Carlton, Millenia Singapore and not come into close contact with others.

But Sow went to the hotel on Ms Teo's birthday on Nov 28 to surprise her with a visit. He had been communicating with her and knew her room number.

Read Also
Man orders cake to surprise girlfriend at midnight, guess who made the delivery 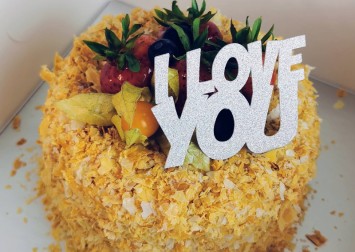 After finding that he could not take the lift at the hotel's main lobby to the 17th floor where Ms Teo's room was, Sow followed some guests to the 30th floor.

From there, he used a service elevator to reach the 17th floor.

While Ms Teo was surprised to see Sow when he appeared at her door, she did not stop him from entering her room.

He spent about an hour there before taking the stairs to the first floor, where he encountered a member of the hotel staff who tried to detain him.

But Sow managed to escape, and took a taxi home.

For abetting Ms Teo to breach SHN requirements, Sow could have been jailed for up to six months, or fined up to $10,000, or both.

The Immigration and Checkpoints Authority told The Straits Times in July that Ms Teo was given a composition fine for breaching SHN requirements.

Members of the public can provide information about anyone who fails to comply with SHN requirements to ICA at go.gov.sg/reportshnbreach or call 6812 5555.

More information on the prevailing SHN and Covid-19 swab test requirements for travellers can be found on the SafeTravel website.