SINGAPORE - The services of the security agency at Eight Riversuites condominium in Whampoa, where a resident had verbally abused a security officer over the Deepavali weekend, have been terminated.

When The Straits Times visited the condominium on Friday (Nov 1), security officers from K H Security Agency had been replaced with those from a new agency, donning a different set of uniforms.

ST understands that the new agency is Alpine Security.

When contacted about the change in security agency, the condominium's managing agent Melana International declined to comment.

It is not known when the contract was terminated, and whether the move was in relation to the recent dispute between the resident and security officer from K H Security Agency.

However, residents that ST spoke to said they had not been informed of the change, and only noticed that the security agency had been replaced on Friday. 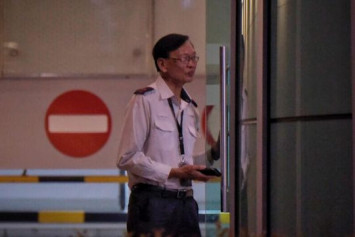 Resident Jessica Wong, 21, told ST that she disagreed with the move to replace the security agency if it was a result of the recent incident.

The first-year student at the Nanyang Academy of Fine Arts said: "I think this is such a bad move because the resident instead of the security agency should have taken responsibility for the matter. After all, the guard was only trying to ensure our safety."

A resident in his 30s, who wanted to be known only as Mr Miguel, said the move, if it was a result of the recent incident, would seem a bit extreme.

“I haven’t talked to the man in the video myself but the conflict seemed to be on him rather than the security officer. It’s quite an unfair move," he said.

The latest twist in the saga comes after the resident in question, Mr Erramalli Ramesh, reportedly apologised to senior security supervisor Steven Heng during a private, hour-long meeting on Wednesday.

Mr Erramalli had been caught on video swearing at Mr Heng after being told by the security officer that he needed to pay a $10 fee for guests parking at the condo after 11pm.

The video, which was posted on social media, swiftly made its rounds online and sparked outrage among netizens.

Some dug up personal information about Mr Erramalli and an online petition calling for his company, JP Morgan, to fire him was launched.