Mr Terry Mariyadas, who has not been home for months, with his wife and one of his two sons in better times.

It has been four months since Mr Terry Mariyadas, 35, was separated from his family, and his wife is worried sick.

Their daily video calls end in teary goodbyes and the stress of having to care for her two young sons - aged two and almost one - without her husband, has caused Madam Kanamah Rathinasamy, 33, to lose almost 30kg.

"Whenever I see her (over video chat) I will remind her to eat," said Mr Mariyadas about his wife.

Mr Mariyadas is Malaysian. He is also the sole breadwinner of the family and has been stuck in Singapore since mid-March, when Malaysia's movement control order was enacted.

It is still unclear whether he will be allowed to visit his family in Johor Baru under the recently announced reciprocal green lane and periodic commuting arrangement. But the senior technician is hopeful that his wait to see his family will soon be over.

"If I could just see them and hold my sons, that is all that I want. Just a few days back home is enough," he said. 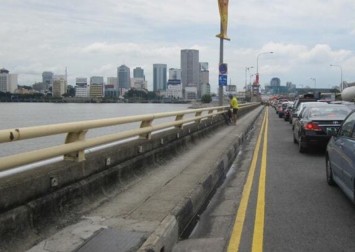 He used to commute daily across the border on motorbike, but since the border closed four months ago, he has been staying at the Four Seasons Hotel Singapore, which is his employer.

Mr Mariyadas missed the last moments with his 70-year-old mother and her funeral in May. He had tried to apply for an entry permit to return home for the rites but was unsuccessful.

"One of the first things I will do when I return is to visit my mother's tombstone. I need to tell her that I'm sorry for not being able to send her off," he said.

He hopes that he will not miss another important event coming up - the first birthday of his youngest son on Aug 28.

"For now, I tell my wife to pretend that I'm working in a far-away place like the Middle East or the UK, and that I can only return home once a year to visit," he said.