Couple abused maid who was caned, given insufficient food and forced to eat own vomit

SINGAPORE - A sales manager wedged a funnel into the mouth of one of her maids and forced a mixture of rice and sugar down her throat after the woman complained about not having enough to eat, a court was told.

Chia Yun Ling then ordered Ms Moe Moe Than to eat her own vomit when the domestic worker threw up. The Myanmar national, 32, complied.

Chia also caned the maid and threatened her by saying that she would hire an assassin to kill her family members in Myanmar.

District Judge Olivia Low convicted Chia, 43, on Monday (March 4) of eight assault charges and one count of using abusive words towards the maid.

The judge also found the mother-of-three guilty of six offences under the Employment of Foreign Manpower Act.

These included forcing the maid to perform her chores clad in only her bra and short pants on one occasion and failing to give her enough food. 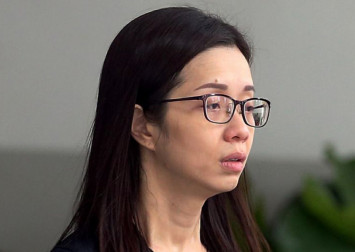 Chia and Tay had earlier faced court in March 2017 for abusing their other maid, Ms Fitriyah, 34.

This resulted in Tay, 41, being sentenced to two years and four months' jail while his wife was handed a two month jail term for committing assault.

The Indonesian, who goes by only one name, was then working in the same Yishun flat as Ms Moe Moe Than.

The couple remained free until the second trial, which concerned the abuse of Ms Moe Moe Than.

Judge Low said on Monday that Ms Moe Moe Than started working at the couple's household on Jan 8, 2012.

She testified during the 31-day trial that she was initially given rice and cabbage for meals but was later provided with only plain rice and water.

The judge said: "She claimed that she was hungry enough to even eat leftover banana skin from the dustbin... Fitriyah confirmed that Moe Moe Than was subsequently only given white rice, and the rice was sometimes mixed with sugar."

Judge Low also noted that a doctor had said that Ms Moe Moe Than looked undernourished.

When she told Chia that she had not been given enough food, her employer force-fed her until she vomited.

Chia had also slapped and caned the maid. On one occasion, she ordered Ms Moe Moe Than to remove her shorts and underpants before caning her bare skin after some plastic boxes in a study room were found to be dusty.

Ms Moe Moe Than testified that Chia wanted compensation from her when she asked for a transfer.

The judge said: "Chia told her that... if she did not repay them back, Chia would hire an assassin to kill her parents."

Tay abused Ms Moe Moe Than through acts such as caning and kicking her while she was in a "push-up position". 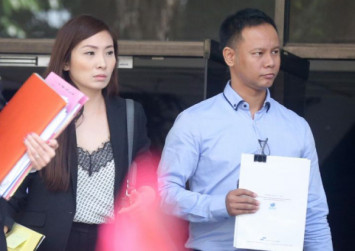 He also ordered Ms Moe Moe Than and Ms Fitriyah to slap each other after claiming that they had moved a piece of cloth on an altar table in the flat without his permission.

Judge Low said: "Moe Moe Tan and Fitriyah were then instructed to slap each other 10 times and to worship in front of the said altar table 100 times despite the fact that Moe Moe Than is a Christian and Fitriyah is a Muslim."

The offences came to light when Ms Moe Moe Than returned to Yangon on Nov 12, 2012, and told her Myanmar agent about her plight.

Singapore's Ministry of Manpower was later alerted and it arranged for her to return here about a month later.

Ms Moe Moe Than was examined at Khoo Teck Puat Hospital, where she was found with injuries, including scars on her left forearm and right wrist.

Tay and Chia have been offered bail of $15,000 each. The two Singaporeans are expected to be sentenced on March 18.