SINGAPORE - The cleaner who was killed on Friday (March 22) after a taxi ran into her in Alexandra Road was a doting mother and wife who expressed love in her own quiet way.

The 66-year-old would wait for her two daughters to come home every night before turning in, and was extra thoughtful to her husband of over 40 years, said her younger daughter, Ms Lim, 30, who works in sales.

The accident has left the whole family - especially the victim's 64-year-old husband - heartbroken, said Ms Lim, who declined to give her full name and wanted her mother to be known as Madam Teng.

"My father is affected the most... Whenever he sees my mother's body at the wake, he would quietly walk away to one side to cry," she said, her eyes tearing up as she spoke to The Straits Times (ST) at her mother's wake on Sunday night. 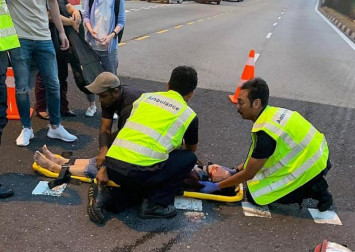 A 72-year-old SMRT taxi driver had ploughed into Madam Teng and another 32-year-old woman at about 7pm on Friday. Preliminary investigations revealed that the man had lost consciousness prior to the accident, said the police.

While the other woman has reportedly recovered, Madam Teng died from her injuries in hospital at around 9pm, said Ms Lim.

She said the family learnt of the accident and Madam Teng's death at close to midnight and were unable to see her for the last time.

"We're all very devastated," said Ms Lim, adding that the family now want answers on how the accident happened.

A video posted on Facebook shows the taxi driver beating the red light and abruptly making a right turn.

They also have not heard from SMRT since the accident, said Ms Lim, noting that the family have found it hard to believe that representatives from the transport firm have yet to contact them.

Ms Lim said the family have been watching and studying videos of the accident taken by other drivers and circulated on social media. 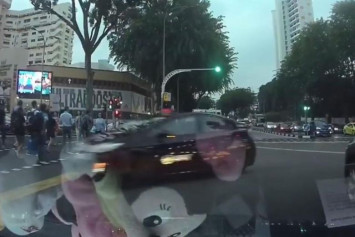 "I can't accept it. The whole accident seems so dramatic. I want to know how the investigation is going on," she said, adding that she hopes to see the video of the accident from the taxi driver's in-car camera.

In response to queries from ST, SMRT's vice- president of corporate communications, Ms Margaret Teo said: "We have reached out to the family of the deceased on Sunday night. Our priority is their well-being and we shall render all necessary support during this difficult time."

Earlier this month, a ComfortDelGro taxi driver fainted while driving on the East Coast Parkway and collided with a centre divider. His passenger then alighted in the middle of the expressway.

ComfortDelGro said then that the cabby had "blacked out momentarily", and when the driver regained consciousness, he realised that his passenger had disembarked.