Gardens by the Bay murder trial: Supervisor says accused asked to meet her but did not turn up with victim

SINGAPORE - Laundry shop manager Leslie Khoo Kwee Hock called his supervisor one morning to ask for help, saying a woman was on her way to the office at Tuas to create trouble.

Then, in a three-way conference call, Khoo told the woman, senior engineer Cui Yajie, that he would pick her up and they would head downtown to meet his supervisor.

But the supervisor, Ms Adeline Toh, never got to sort things out between the two on July 12, 2016.

After picking up Ms Cui, Khoo drove to a secluded road near Gardens by the Bay, where he strangled the 31-year-old Chinese national. He later burnt her body at Lim Chu Kang Lane 8 over three days until nothing remained. 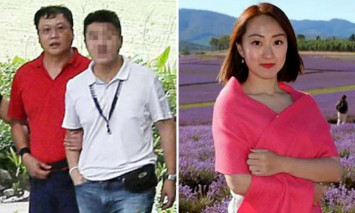 Testifying on the third day of Khoo's trial on Thursday (March 14), Ms Toh said both he and Ms Cui sounded "normal" and "okay" over the phone that day and did not seem angry.

At the time, Ms Cui did not want to give her name to the supervisor, saying that it was inconvenient to talk. Ms Toh said she could hear that Ms Cui was on the MRT.

Khoo said he would pick Ms Cui up from Joo Koon MRT station and meet Ms Toh at Westin Hotel, off Shenton Way, where she was stationed at the time.

Ms Toh said she called Khoo when he did not turn up after nearly three hours.

"He told me that the lady did not show up. He said never mind, just forget about it," she said.

The prosecution's case is that Khoo was bent on silencing Ms Cui after she threatened to tell his employer that he had not repaid $20,000 that she handed him to invest in gold.

Khoo, who had also swindled four other women of $65,000 and misappropriated $24,000 from his company, could not afford being exposed, said prosecutors.

Ms Toh, who described Khoo as a reliable and trustworthy worker, said after news broke about his arrest, the company received many calls from people who said he collected money from them for alleged franchise agreements.

ALSO READ: Gardens by the Bay murder: Accused asked victim to be his girlfriend at first meeting

After looking into its accounts, the company found that Khoo, who had been entrusted to collect cash from three outlets, did not submit all the money to the office.

One victim testified how she paid Khoo $11,600 after he duped her and her husband into thinking that they had a franchise agreement to run a laundry outlet.

One of Khoo's former girlfriends, who believed he was single and working in the family business, said he suddenly proposed to her in June 2016, even though they had broken up for a year.

Various reports were also admitted into evidence, including a Health Sciences Authority test which found the DNA of both Khoo and Ms Cui on a toothbrush taken from her home.

Ms Cui had told her parents and colleagues that she and Khoo were lovers, while he has denied he had an affair with her.

The prosecution is expected to wrap up its case on Friday (March 15).

Khoo's wife, a prosecution witness who was offered to the defence on Thursday, will testify for her husband next week if the judge finds that he has a case to answer.