The carpark at Blk 526A Pasir Ris Street 51 where a girl is believed to have fallen to her death on Jan 8.

SINGAPORE - A girl who fell to her death in January at a multi-storey carpark was riding her friend's fixed-gear bicycle down a slope in the building, police investigations revealed.

Such bicycles generally do not have handbrakes.

The 13-year-old had started to learn to ride a bicycle only when she was in Primary 6 and was still a novice at cycling, the state coroner was told on Thursday (Sept 3) during an inquiry into her death.

The girl was found motionless at the ground level of the multi-storey carpark at Blk 526A Pasir Ris Street 51 on the afternoon of Jan 8. She was pronounced dead by paramedics at the scene.

Chinese-language newspaper Shin Min Daily News reported that a domestic helper, who spotted the girl lying at the foot of the building after hearing a loud noise, called the Singapore Civil Defence Force and the police. 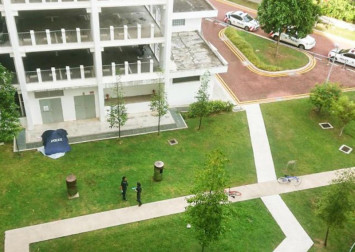 Investigations showed that the girl and her classmates had gone to the carpark after school on the day of the incident, Assistant Superintendent of Police Gabriel Goh told the court.

She watched her friends cycle on fixed-gear bicycles on the sixth and seventh levels of the multi-storey carpark and then tried doing so as well, he said.

Investigations revealed that a friend accompanied the girl on foot initially as she was cycling, said ASP Goh.

The friend said that the girl had trouble controlling the bicycle when she first got on it, he added.

ASP Goh also said that the friend was unable to keep up after the girl began cycling down the ramp from the seventh to the sixth level of the building.

While the friend asked the girl to turn right, she continued to move straight towards the metal railing at the side of the carpark and collided with it, he said.

The court was told that she was flung out of the building but grabbed the railing "momentarily".

However, she could not maintain her grip and fell to the ground, ASP Goh said.

He said the girl suffered multiple injuries, including fractures to her skull and ribs.

An autopsy revealed that her injuries were consistent with those resulting from a fall from height, ASP Goh said.

The inquiry is expected to continue later this month.